How not to get hurt at Whistler

In my few days at Whistler on standby for rescues on the Olympic course I’ve had a few opportunities to see the Whistler patrol members in action. 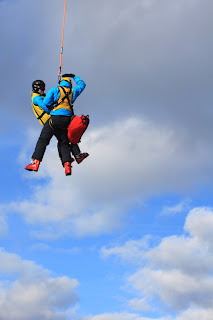 A regular weekend on Whistler sees a number of critical injuries (where critical means life threatening), so these guys and girls get a lot of practice. Any given rescue could involve an extraction from a cliff area requiring rope rescue, an avalanche, and chair lift rescue, or a helicopter rescue (or even a combination of all three). The Patrol and the Whistler SAR team also cooperate with out-of-bounds rescues. 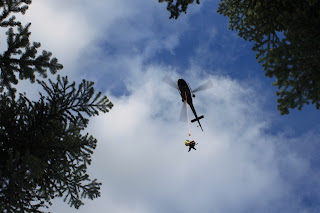 Yesterday the downhill races were cancelled, so we did two simulations on the downhill run with the Women’s medical team. Between the first and second simulation, Bruce, the chief of patrol for the men’s downhill, and one of the guys who designed the rescue system we use, was called to perform a HETS rescue of an in bounds skier. The word is that the skier broke her femur and pelvis in a gladed area.

Either injury could be critical because a broken femur can tear the femoral artery, and a broken pelvis almost always is accompanied by internal bleeding. The speed of transportation to definitive medical care can be a factor, so the helicopter and long line were required.

Our second simulation of the day involved a “soup to nuts” scenario where we took the patient from the hill to the Whistler Polyclinic, much the same as the actual rescue a few days ago. We decided to practice transporting the patient, the rescuer (me) and a doctor on the long line. Interesting feedback from our pilot, Paul, is that the 3 person load is somewhat easier to handle than a 2 person load. The patrol members were also fascinated by the idea that the doc could go with the patient, since they don’t do that in Lake Louise where most of them have volunteers for World Cup events before.

Landing at the polyclinic this time, in good weather and on a day where the drill was scheduled, we had a crowd of staff waiting. Most of them were just observing, and by “observing” I mean filming, and taking pictures. I must say that it was a rock star experience having so many eyes on us as we descended to the landing zone. Normally we transfer patients to BC Ambulance, but this time we had fully gowned and scrubbed doctors and nurses approaching after we disconnected.

A few minutes later, the call “no duff” was issued; this means we have a real event to respond to. Information is coming in that there are some skiers on the Decker Glacier near Blackcomb who have been involved in an avalanche and that one of them has a spiral fracture of the tibia. We wrap things up, and head for the helipad. As we get back into the helicopter the story changes again: they skiers are moving (not really possible if there was a fracture). We decide to fly out there anyway to see if they need assistance. The story changes again, and now the skiers are approaching seventh heaven, and refusing help. A short flight over the area and we only find skiers on their feet and nobody requesting help.

Whistler SAR runs a great blog and has tons of information on the areas of the mountain where people typically come to grief. It offers some great insight into how skiers get into trouble. I’m very much in favour of publishing information on how people come to require rescue; the best way to learn is through other’s mistakes.