It’s almost amusing to see how media agencies attempting to describe where Meager Creek is. The mix of “north of“, “West of” “x km from” or even “near x” etc is confusing to say the least, especially when it’s basically wrong. Best to ignore such verbiage and display a map, and I will attempt to do right now:

According to my measurement, the slide is approximately 50km on a bearing of 301 degrees from downtown Pemberton. That’s an 80km drive. According to new agencies, the general public is not competent enough to tell the difference between “North of” and “West Northwest”, which is definitely more west than north. But enough nitpicking as to location.

The slide is huge. Compared to the Hope slide, the largest ever recorded in Canada at 46 million cubic meters, the early estimate of the size of this slide is 40 million m3, and it could easily be larger than that.

It started on Capricorn Mountain, an extinct volcano in the Meager Group, and is well known for it’s instability. Chalk one up for building code and zoning standards, but this is the main reason why nobody has been allowed to develop the Meager Creek Hot Springs, not for tourism, and not for Geothermal energy.

The slide happened at around 5:40 AM Friday morning. The most recent reports state that it flowed down the side of the mountain, and across the aptly named Devastation Glacier where it picked up ice, snow and water, and down the Devastation Creek valley toward Meager Creek. 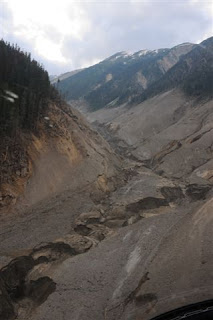 Pemberton SAR flew the area (see their photo stream), and picked up hikers and campers who were in the area, some of whom had no idea the slide had happened since they were above it. 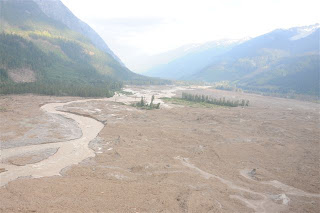 The slide dammed Meager Creek, causing the rover to build up above the dam. Being an unstable mix of rock, ice, mud and debris, the dam could break at any time. Evacuation orders were issued for 1500 people, and alerts for another 4000 more. Reception centers were opened in Pemberton, Whistler and Squamish to be ready for displaced people. A state of local emergency was declared. 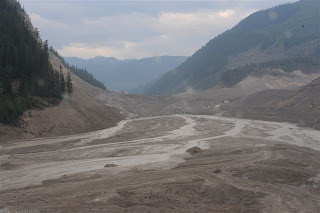 At this point the damn has broken and Meager Creek is flowing again and there does not appear to be any immediate danger. I’m pretty sure that the Hot Springs are inaccessible by road. The SAR portion of the operation, including helping with the evacuation, seems to be over.

Note that a slide in this area has killed people before: in 1975, 4 geophysical survey crew members were killed in a rock avalanche.