In my post yesterday I noted that it’s important to get a synopsis of weather conditions. My rationale; most weather forecasts provided by Environment Canada and other forecasters are geared toward the sea-level public, and contain wind and rain amounts, but no overview of what type of system, what direction and when it’s expected to hit the coast. Backcountry travelers need a report that allows then to adapt to a changing forecast; knowing what systems are coming is better than just being told how much rain to expect. 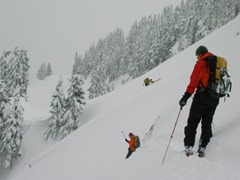 With yesterday’s synopsis we saw that there were two systems approaching the coast; both generating rainfall warnings. One was going to hit last night (Monday), and the other today (Tuesday).

A frontal system currently lying through Hecate strait and along the west side of Vancouver Island will slowly move eastwards while weakening. A second frontal system will move into the offshore waters this evening and approach the coast Wednesday morning.

The second front is indeed delayed, and will deliver it’s load this evening, and through to Thursday

In response, the most recent Avalanche Bulletin issued by the CAA for the North Shore revises the avalanche hazard to moderate – the rain delivered by last nights storm has percolated into the snowpack, and any avalanche activity due to the increased load has probably happened. Also, the freezing levels for the north shore are not going to go as low as expected.

The CAA also issued a revised report form the entire South Coast, with the precipitation spread out through Wednesday, Thursday and Friday. Note that while Thursday was going to have only Considerable hazard in the alpine, now it is High. Freezing levels are only expected to drop to 1000m, revised from 800m, with a corresponding note in the report to watch for wet snow avalanches below treeline.

This doesn’t mean it’s safe to go out there however, since Mount Seymour and Grouse are closed due to dangerously high winds.