I got a GoPro Hero camera for Christmas. I figure since I do some exciting things on occasion I may as well record some of them. I have a few friends who’ve bought this camera, and almost everyone has seen the ads all over the internet; it seemed like the right unit to get the job done.

My first impressions on unboxing the unit was that it has some good design qualities; the waterproof case is separate from the main unit, which removes the need to have several waterproof doors for battery and memory card. The mount is on the bottom, which gives more mounting options than a lipstick” style camera, at least at first glance. And there seems to be in impressive array of different mounts in the box.

However, on pulling everything out, I was faced with some disappointment. For a unit that bills itself as an “extreme sports” camera, and a package that is specifically intended for help mounting, I can’t say that I’m impressed with the parts that are meant to attach the camera to the helmet. These consist of two styles: the first is a simple stick-on. The sticker-backed mounts come in two styles, flat and curved. However, the curve is only on one axis, which makes it an imperfect fit on a helmet which is curved on two.

However, even if the mount was properly curved to fit the helmet, who is going to trust a mere sticker when being dragged through the air at 60 knots? 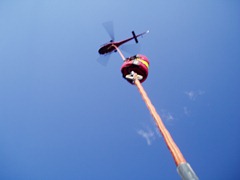 The second mount, known as the “vented helmet strap mount” is a little better, if the straps are long enough to fit through your helmet vents. This may be easy for a mountain bike helmet, but it’s less than likely to fit on a climbing helmet, or any sort of aviation equipment. If it fits on a helmet, it seems that unless it is very tight it is going to slip.

The third mount is a simple “headlamp style” mount, which, when modified with some sort of “keeper” in case it slips off the helmet, may prove to be the system I end up using to film helicopter operations.

The obvious helmet mount that comes to mind would be a camera-facing piece similar to the sticker mounts with a metal bolt which would screw into a backing plate. The backing plate could be placed on the other side of a helmet vent in a climbing or aviation-style helmet. This would allow for a very secure mount that would be almost impossible to vibrate or blow free under extreme conditions.

My first, rather lame, video using the GoPro Hero is below. I used the headlamp-style mount. Please, no judgement on the double pole plants. 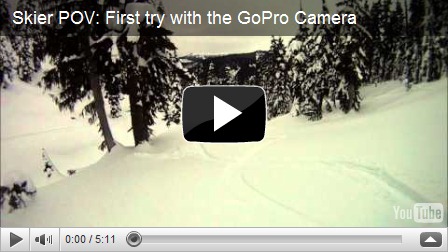 Some Video of me skiing, no judging the double pole plants.

My final insight into the camera is this; that the battery life on this unit is abysmal. It is listed as 3.7V, 1100mAh. I treated it better than my Canon T1i with a battery of 7.4V, 1040mAh – the Canon was in the pack, the GoPro was in my chest pocket near my avalanche transceiver. The 5 minutes you see in the video above was the result of editing down 10 minutes of vide, after which the battery died. I charged the camera the night before. I blame the performance on cold weather, although I believe I took more than adequate steps to preserve the battery, and the temperature was only –1 to –3C.

Other than the above complaints, my first impressions are that this is a fairly good unit, although fairly expensive for what it is. It may be that I have a defective battery, more testing will tell.

Note; this review is subject to my disclaimer, as are all my posts. Neither GoPro not any dealer, distributor or dealer provided my with any consideration or remuneration of any sort for this review. I am not an expert, and these are my opinions alone.