A minor rescue on Eagle Ridge last night. Two guys were caught by darkness and we were called to locate and hike them out. They were in good shape and would have made it out by themselves, but you can never be sure.

Not very interesting except for a comparison of how it would have went 20 years ago. With some insights from lifetime SAR member Dan Cook who I mentioned in my last post;

Sounds just like one we had 20 years ago right after the time change. Father & son got caught by darkness too. Don and I were on the team that located them.

Dan describes a search where the car was found in the parking lot at Buntzen Lake. Searchers were sent up the Swan Falls, Halvor Lunden trail, and on the Diez Vista’s north and south trails. In teams of two that’s 8 searchers.

On last night’s search we had mobile phone numbers for both subjects, so I just gave them a call. Luckily both of them had lots of juice on their phones, so battery life wasn’t an issue. One of them made the comment that they were quite busy fielding texts and calls from the RCMP and their families; the first call I made to them went to voice mail! 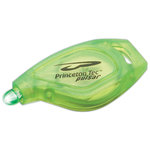 When we got them back to the command post we heard the whole story. They had left on flashlight behind by mistake (I had spotted it in the front seat of their car), and the other one had malfunctioned. They had been travelling the four hours since sundown by using a light like the one pictured above — a “keychain” light.

The light is one of the most important things to take on a hike. We’ve rescued people who’ve injured themselves by continuing to move in the dark; they sprain ankles, break lags, and fall off small cliffs. We’ve also rescued people travelling by the light of their mobile phone or GPS unit.

In this case, these guys had backup lights that were just good enough to get the job done.

In a humorous side note, the name of the trail reported in the news link above was “Oliver London” — the real trail name is “Halvor Lunden“. Note to self; make certain to spell trail names for media contacts.