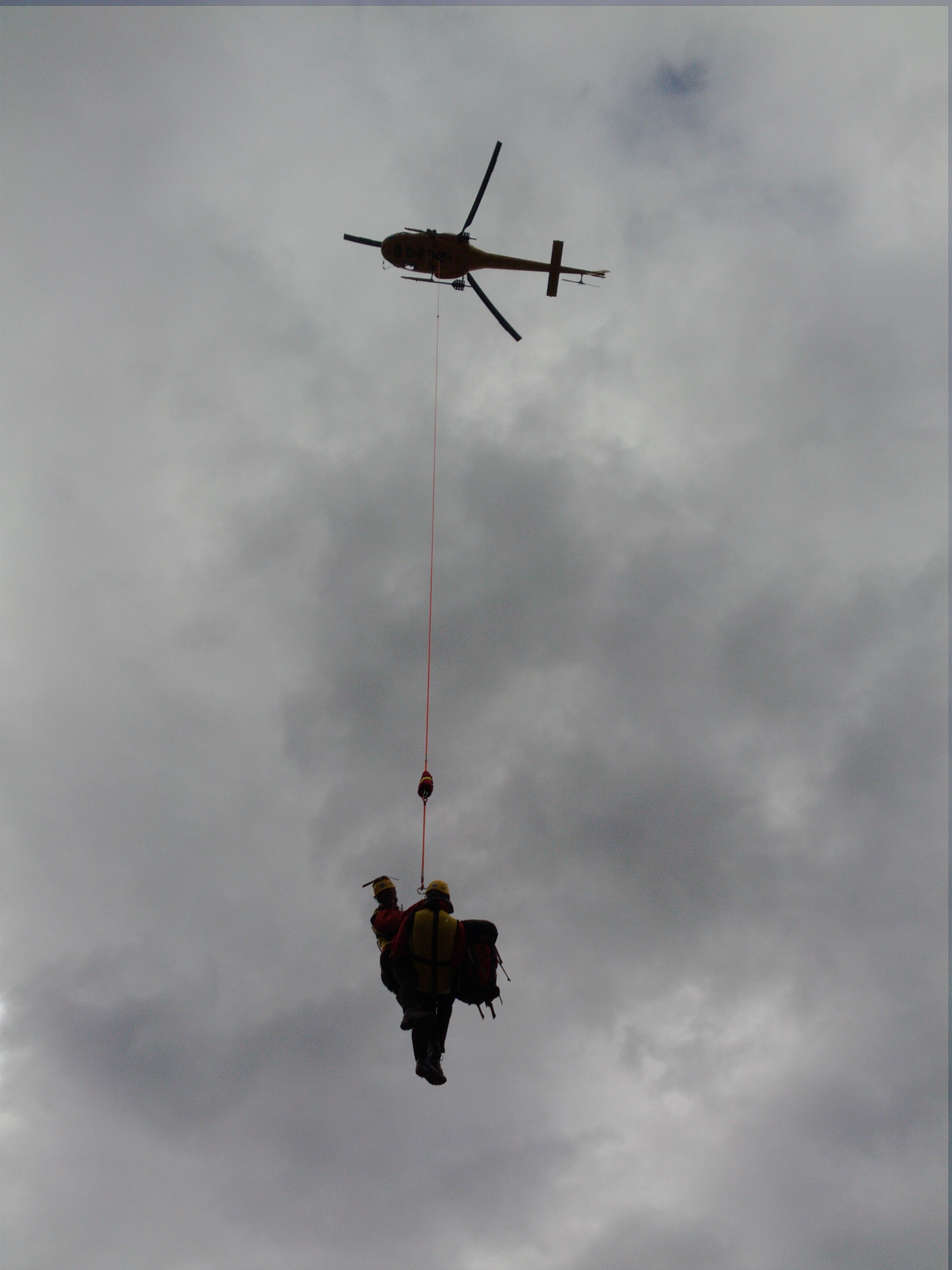 My team ended up conducting a large search over the BC Day long weekend.

On Thursday Aug 5 at 5:30 I happened to be the on-duty manager when we were paged. I called back and talked to a Port Moody Police officer who told me the details; two 20 year old women with special needs had gone missing at Sasamat Lake. My initial thought was that this should be an easy search, but then I heard that they had last been seen near noon… a five and a half hour head start.

As an aside, please note that I am being scrupulously careful not to reveal any details about this search other than those that have already been reported in the press, and my personal thoughts.

I got the team rolling. Several members happened to be training that evening at our SAR base in Coquitlam, so our response was very quick and by the time I arrived two other SAR managers had command set up and were already filling in the lost person profile.

At 23:30, Judy, the first subject, was located on a trail 6 hours after we were called. This is about average for a SAR team based on my experience.

After locating the first subject we had very high expectations of finding the second one quickly, but this turned out to be wrong. The problem was this; Judy had issues communicating with us, we had trouble understanding her, and the up-shot was that after multiple interviews we didn’t get accurate information on where and when she and Joy had separated. We surmise that Joy left Judy, and got off the trail as darkness fell. And so we spent the next two days using basic SAR methods including probability, attraction, containment, and others in our attempt to find her.

We had infra-red, dog teams, helicopters, several ATVs, boats in the lake, and on Saturday over 100 people searching including 35 SAR members and over 60 members of the public.

Finally on Sunday we had a breakthrough; Judy was brought back to the search area (not for the first time), and we decided to send her out on the trails in an ATV with a Port Moody Police Officer who had training in how to interview children. Officer Fisher had been on scene since the first hours of the search and had built a relationship with Judy. Taking her out on the trails gave us a chance to ask the question “Have you been here before?” — which we found gave us some good results.

But the big break was this; Judy voluntarily said that she had not been alone for very long when we found her. This changed what SAR professionals call the Point Last Seen (PLS) – a location where the subject was verified to have been seen by a witness. Although vague, we could deduce from other statements Judy said approximately where they had last been together.

Using this new area as a planning point, we re-focused the search, and Joy was found within 4.5 hours of this information, 76 hours after being reported missing.

I was the one who “took the call”, managed the first 16 hours, and was on scene when we found the first subject Judy. By chance I also happened to be on scene when we found Joy, but between those two times many talented SAR managers and searchers had been on duty; it was someone else’s idea to bring Judy back and re-interview her (this is a common thing), and someone else had the very good idea to put her in the ATV and send her up the trail.

I’ve said before that one of the most surprising things about being in SAR is the feeling I get working with the people who trained me, and with those I have trained. Even working with other people who’ve come out of the same BC Search and Rescue system — we speak the same language, and understand the chain of command and the SAR culture. We trust the system to work.

Being at the head of this juggernaut was a new experience; that of trusting SAR members to trust me and do the tasks that myself and the planning team decided needed to get done. Unlike a job, volunteers are here by their free will; this isn’t the military and there’s no discipline or censure I can use to force anyone to do anything. The whole system works on trust and respect. They trust my decisions, and I trust their actions.

The Incident Command System works! We had people from 16 different agencies, and 11 different SAR teams unified under a single command structure.

Many of those agencies were professional emergency responders; fire rescue, police, etc. They also had to trust that we, volunteer SAR members, knew what we were doing. As a SAR member I’m standing there with nothing but a green vest giving me the “authority” to ask police officers to do things for me! I can tell you I got nothing but respect and cooperation from all those involved, and I should not be surprised; this is how professionals work together.

The photos of the subjects that went national, and were printed in newspapers, broadcast on TV, tweeted and Facebooked came from one source – a scan of the subject’s ID cards that I did at 7:30, and then tweeted a few minutes later. We did a colour scan of their ID cards, and printed it out enlarged. I put that down on the photocopier to dry. As another SAR manager was discussing how to send those images to the press, I snapped a photo with my smart phone, and tweeted them. The broadcast images came from camera operators just videoed the image pinned to the white board. Later we cropped the images and edited them to contain some text with the subject’s descriptions.

In future I think we’re going to develop something more organized and streamlined with respect to the “wanted poster”; the ad hoc method works OK, but it would be better to have something that worked smoother.

I ended up doing several media briefings. We set these up for 10am, 2pm and 5:30pm daily. However, I still got calls, pages, and emails “out of band” asking for updates. These were very distracting. In retrospect, we (the management team) could have set up press releases and Twitter updates on schedule through the team’s web site and social media accounts. To be completely honest, we didn’t have enough people to do this because it was the BC Day Long Weekend, and most of the SAR people in the Lower Mainland were away.

This may sound like a small thing and a distraction from the main search effort but nothing could be further from the truth; the media and social media are a strong ally in a search effort. Providing them with accurate and timely information can and often has led to a successful outcome. In this case a bus stop was in the parking lot, and it was entirely possible that Joy had left the area; having her photo on TV was one of the best ways for us to find her if this had happened.

The SAR books on lost person behaviour and others have statistics on how long someone can survive under various conditions. These statistics are compiled from actual SAR tasks from around the world and attempt to break down the terrain, weather, and other factors into the probability that someone will be found alive after a certain number of hours.

In this case, we had the weather on our side as the days and nights were warm. We found that under the tree canopy on the side of the mountain that it was not as hot as in other places in the Lower Mainland and so we thought that the chances of her being alive were very good. Of course medically we were preparing for someone who would be severely dehydrated.

This search, and others in southwest BC, serve to show that young, healthy people can survive for a long time with no food or water in the right conditions, assuming that they have not been gravely injured. One searcher’s opinion was that she would have been OK for another 24 to 48 hours — and that searching for that long or longer should be a standard. Of course many people in this situation attempt to continue travelling which exacerbates dehydration, and due to disorientation and declining cognitive ability from lack of food and water they usually make their situation worse.

Both Judy and Joy were found within the boundary where 75% of lost people who have cognitive disabilities are found, although they were both uphill of their LKP which is only true for one third of cases.

I this case I had the great honour to be present when the exact opposite happened, and to be the recipient of the joyful emotions of a family who was facing such a loss, only to spared. Joy was found at 16:00, and around 20:00, after everyone had gone home and we were just about to leave the parking lot her father reappeared and I got the chance to have those few words and experience that joyful moment with him. I’ll remember that for the rest of my life.