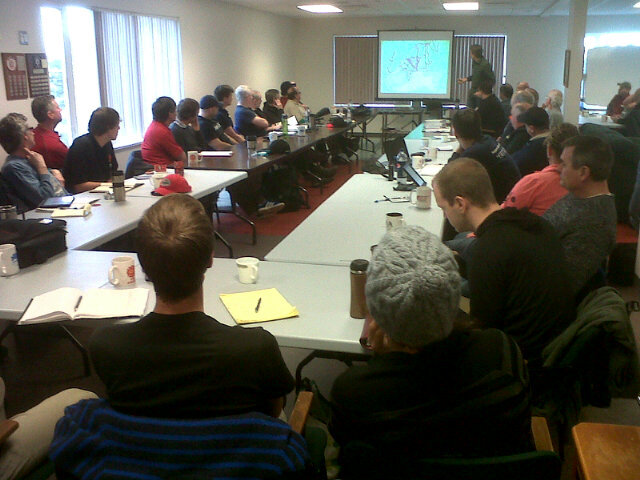 I presented my talk from SARScene 2012 (for those who attended, this is the link to the slides if you want them), and we heard presentations on some of the following;

Comox SAR recently designed a new command vehicle and their presentation showed their communications assets and had several case studies on communications issues they’ve had on tasks, and how they solved them.

Ken Needen from Arrowsmith SAR presented the Project Lifesaver system. Project Lifesaver is a way to track people with dementia and other developmental disabilities. When these people “wander” it can be one of the hardest kinds of searches a SAR team can take on because in the urban environment they can get on public transit, shelter in buildings, and be generally very difficult to find. The Lifesaver system consists of a transmitter and some Radio Direction Finding equipment that helps SAR teams find the subject quickly. I will write more about this in the future.

Paul Giffin, EMBC Regional Radio Representative / Radio Amateurs of Canada
Paul gave a presentation on what it was like to be the primary radio operator and what it took to overcome the communications challenges on the Tyler Wright search, of which I have written many times. It was great to hear what it was like at the command centre since I was one of the people in the field for most of this search.

Two government representatives gave some insights into the difficulty of designating a province-wide combined events channel, mentioning how recognizing what is Search and Rescue and what is not is difficult for some levels of government. Throughout the day many documented instances of different agencies not being able to communicate were brought up. It would seem that this is an urgent issue that should be resolves soon, but it;s one that involves frequencies and also an international element as radio broadcasts from BC are often hears in Washington state where they might be using the frequency for something else.

Several teams brought radio and comms equipment to demo. EMBC brought a radio programming command centre in-a-box. Lots of information was exchanged on how different teams were coping with their various challenges. An excellent day, with lots of useful information.