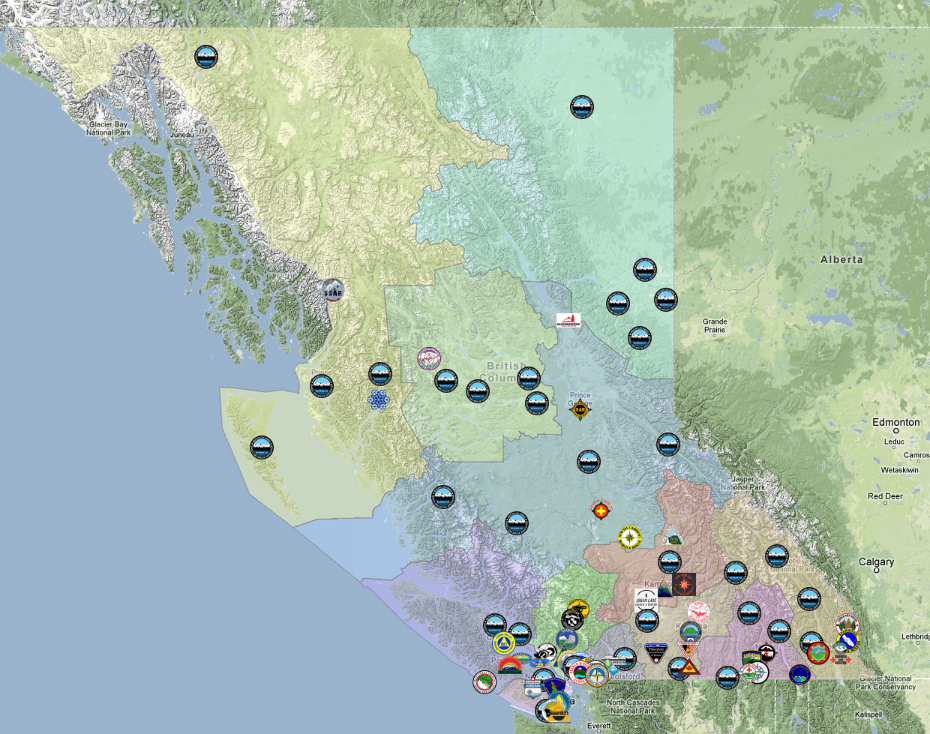 I’ve been doing some work for the BC Search and Rescue Association, and the other day I posted by Twitter, Facebook and Google+ a prototype of the map I’m working on for them.

Here is the map, embedded below.

This map is the result of some collaboration between myself and Rick Laing from Ridge Meadows SAR, and by “collaboration” I mean that Rick did 90% of the work.

Rick developed the map using ESRI tools and posted it to ArcGIS Online (you can look at an early version of that map here, and a later one here).

I had the option of embedding the map “as is” in the new web site, but I decided that there was some value to having it in Google Maps, the biggest reason being that I could control a Google Map’s style much better than the ArcGIS map. Rick exported the KML for the BCSARA/EMBC regions, and I “harvested” the data table backing the map by hacking the HTML on the ArcGIS page.

I split the KML file into three parts; the data containing the team locations, the BCSARA regions, and the RCMP E Division Jurisdictions (which are supposed to define what area a SAR team is responsible for). I put all of the SAR team data into a Google Spreadsheet where I can edit it more easily, and I wrote a script to export the spreadsheet as JSON (A Javascript notation). Then I gathered up all of the SAR team logos I could find to make a custom marker for each team.

The result of this work (so far) is displayed above.

I tweeted the link in order to get some testing, and good thing too; Rick discovered immediately that it didn’t work in Firefox. With that bug fixed, I got some other feedback on the map which led me to the next consideration;

Why not expand the project to include more SAR teams?

I might regret this later, but I figured, why not? I have a process for editing the team data in a spreadsheet that functions like a database. I export the data periodically to a JSON file, and put that on the web server.

I wrote a quick Google Form (embedded below) to gather data to expand the map. It asks for some simple, public information about your SAR team like the team name, location (address), coordinates (if you know them), and the number of members. I also ask for an email contact address (optional) which will not be published.

Originally this was for SAR teams in BC but I think I have all of those (except for the Royal Canadian Marine SAR). Several people requested I expand this to all of Canada, but it’s just as easy to make it world-wide. As time goes on I’ll take the data and update the map, and perhaps add more features like filtering. Contact me directly if you have any questions.

Last night I added RCM-SAR stations in BC (39 of them), and updated the map. I’m in the process of adding the Roberts Bank Lifeboat Society, and 95 CASARA team across Canada.

Just added the CASARA teams, and the 35 teams listed on the Search and Rescue Association of Alberta site.