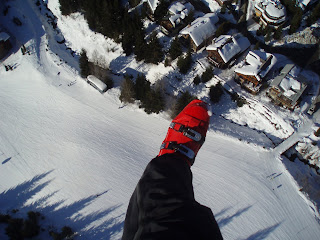 I first volunteered for Search and Rescue in 1999. A friend of mine in university suggested it to me. It came up after a discussion about a high school friend of mine who had died on a mountain near Hope; I had asked my friend, who volunteered for SAR, if he knew anything about the search. He told me he had been on the search and was there when the body was recovered.

I’ve always been involved in some sort of service. In university it was social justice and environmental causes. I had become tired of committees and politics in these organizations. Search and Rescue sounded like a way I could devote some of my time, and my backcountry skills, to a task that was simple, and results oriented. When my SAR friend told me the team was recruiting, I jumped in with both feet, and embarked on one of the most challenging and rewarding jobs I have ever had.

My concept of SAR was exactly like how most searches evolve: ground pounding, running trails, and bushwhacking. Map and compass skills. Lots of time spent training. Hours spent training and preparing for things that happen rarely. Weekends devoted to strenuous and intellectually challenging courses. Rope rescue, avalanche rescue, swiftwater rescue, and mountain rescue. Inclement weather, hiking at night, in the rain and snow.

One surprise, and something that I learned on my first search, was the role that helicopters place in SAR. After hiking all night up into the snow, we were picked up by a chopper near dawn on the summit of a local mountain. After all the drudgery and slogging, one bright light at the end of the task; a ride home. 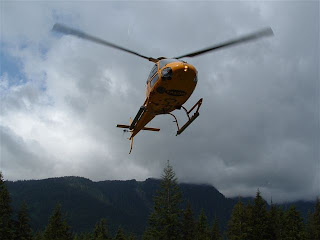 I can still remember how excited I was that first ride. We communicated with base, and my team leader, the same friend who encouraged me to join the team, told us they were sending a helo and it was time to find a place to be picked up. A clear space found, a briefing on how to get into the helicopter and we were ready — and the loud yellow bird wheels around us twice, and lands. Inside in a blur, headset on, doors closed. A shudder, a hover, and the pilot throws the throttle over and we dive off the side of the mountain. A thrilling 5 minutes later, we’re back at base. 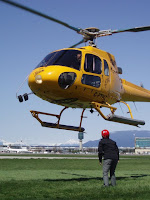 Each year we sped more time training with, and using helicopters.We work around them, and under them. We take the doors off, load them up and unload them. We get in and out of them while they hover. We look out the windows, we hand out the doors, and finally, we dangle under them on a 100 foot line.

Yes, that last one needs some explanation.

A few years ago the Province of BC developed a standardized Mountain Rescue Training Program for SAR, and I was in the first group of students to go through it. As a part of the training they included a course in helicopter rescue, specifically on a technique variously knows as Helicopter External transport System (HETS), Helicopter Flight Rescue System (HFRS), Long Line Rescue, or Class “D” operations. Whatever you call it, it’s dangling on the end of a rope attached to a helicopter. How freaking cool is that.

The rational behind doing this, besides the total cool factor, is that it saves lives. Helicopters can usually fly over mountains, but to get a rescuer to the scene of a seriously injured subject can take hours. With a rescuer on the end of a rope, the helicopter can sling him in to a ledge one foot wide, through a hole in the tree canopy five feet wide.

Best freaking ride in the park! (more in part 2)