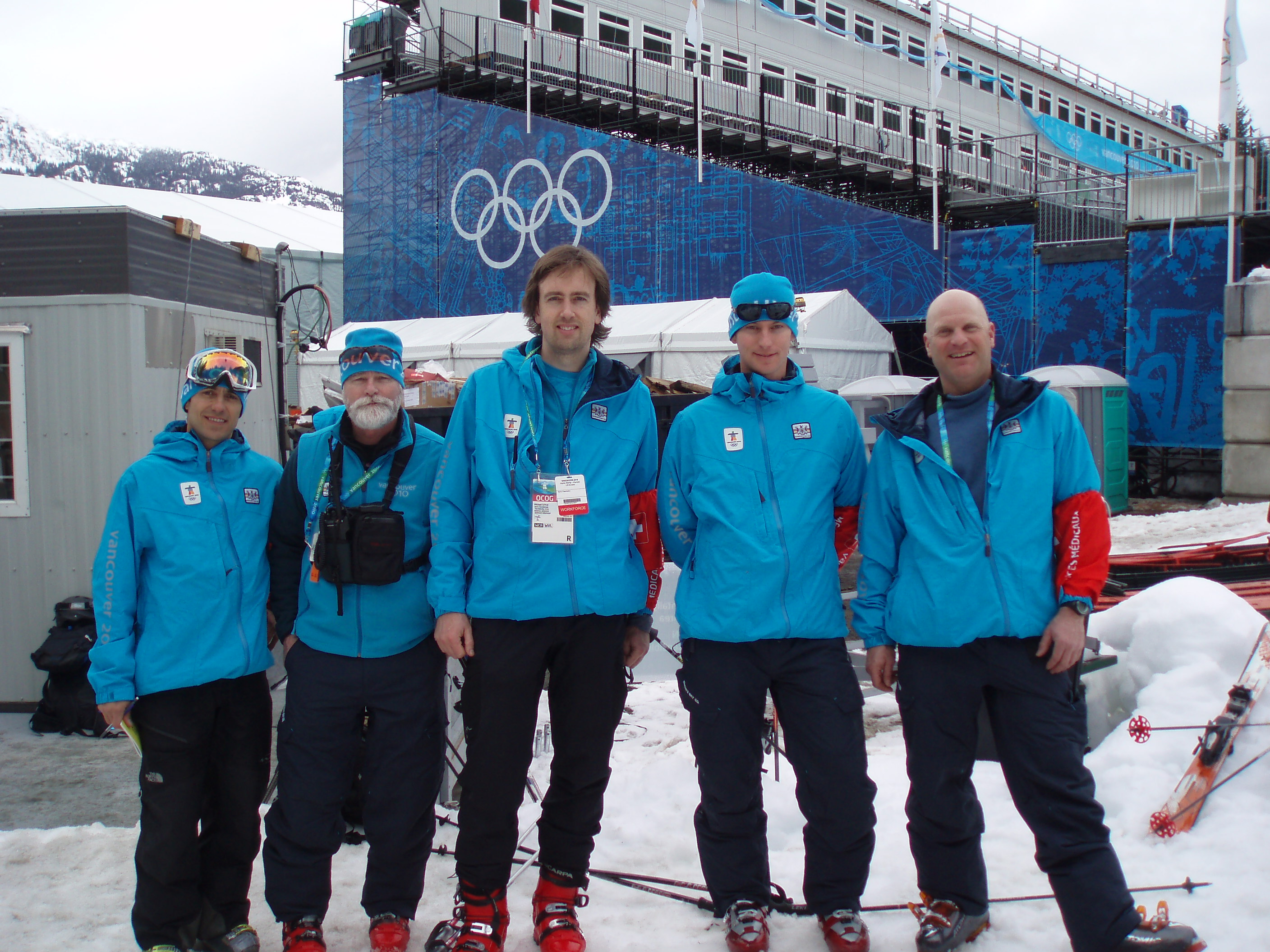 Two days of training at the men’s and women’s downhill skiing course, and one day to go before racers start practising.

First, some terms of reference: there are just about 2400 blue-clad volunteers for the men’s and women’s downhill, and this Smurf army arrives at the base of Creekside for check in every day. This is not counting the security people (more on them later). 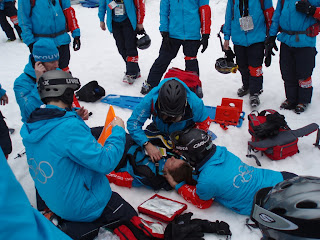 But about the imperative; being immersed as a volunteer, every part of my day revolves around the Olympics. It’s a little like being part of a country at war in that every part of of the economy around Whistler is connected to the goal of putting on the big show. It’s also like being in a police state in that there are police, cameras, fences and checkpoints everywhere. And uniforms, everyone has one; volunteers, security, and each Olympic team. At 05:00 we are up, by 06:00 we’re catching a bus. Buses are free in this particular police state, all I need to do is show my citizenship card (Olympic Credentials). Most of the people on the bus are in the army like me. We arrive at the venue and join even more uniformed volunteers in a long line to sign in for the day, then join another line to get breakfast, and still another to pick up lunch. Finally, we line up for the gondola to get up the mountain and onto the course.

In this army there are symbols of status. As a part of the medical staff I an given a red armband to be worn only on the left arm unless I an somehow missing a left arm in which case they said they would consider allowing it on the right. As a course worker I am to be given a red leg band. Somehow, the helicopter rescue team are not given the red leg bands, and we begin to feel like we’re not as good as everyone else who seems to have one. When everyone is dressed alike, these differentiators are important.

When we arrive at the lift, our citizenship papers are supplemented with a lift ticket. However, the tickets do not scan, and the lifties seem to blame us for this failure. Another mark against the heli rescue crew.We spend part of the rest of the day chasing down the missing leg bands, and working lift tickets, and in the process are introduced to the Kafkaesque workings of the Olympic bureaucracy.

But enough about the ins and outs of working in a large organization. To be clear, everyone is extremely friendly, and very helpful, and I fully expected glitches and found that there were less of them than there could have been. People are willing to go through these hardships with good humour and patience. Thus the imperative takes hold.

About our primary activity for the past two days. Slipping. For those who don’t know, slipping is the skill of sliding down a ski slope sideways, with your ski tips perpendicular to the fall line, or slope itself. If you’ve ever seen a beginner snowboarder trying to make it down a difficult slope, you’ve seen slipping.

Our crew needs to familiarize ourselves with the the race course, but to ski the course means moving the snow around; skiing naturally creates moguls and other formations. To prevent this and other unwanted movements of snow, course workers “slip” the course. Slipping is also used to condition the course after a snowfall, and between racers to repair damage caused by the the actions of skiers, racers, coaches and other events.

It turns out that slipping is also probably the safest way to travel the course. By the time the course has been prepped, it is no longer the fun place it might be for a recreational skier. It’s completely smooth and it’s icy from the careful application of water (to preserve the snow and make a faster race). To be blunt, it’s freaking scary. In the words of one of the crew “we’re trying to make our way down without falling, and the racers are trying to squeeze out another hundredth of a second. 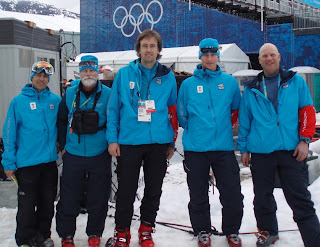