What I am not allowed to do

Michael Coyle Posted on 04/02/2010 Posted in Blog Entry No Comments Tagged with opinion, training, olympics
I have been given a list of do’s and don’ts about being a volunteer at the Olympics:
Some of the most interesting do’s and don’t have to do with logos. We have been repeatedly warned that we are not to wear anything with a large and easily visible logo on it. However, as a requirement of my job I have to wear ski boots which are bright red and have a large, visible logo.

In addition, I have some serious doubts about the uniforms. Those that know me know I am 6’4″ and 220lbs; usually take and extra large in just about any clothing. Well the Olympic uniforms appear like a clown suit on me. Now I have no trouble wearing what I’m told to, but when hooked up to a helicopter, you’ve got to have a harness, and it kinda has to fit.
Also, the helicopter moves. During the lower and raise portion of the rescue it’s really slow, but once under way it really picks up speed. See, the down wash from the rotors has a cyclonic action, which is a way of saying that the air is all spinny. Under a certain speed, the turbulence of the rotor was makes anything hanging on the end of the line, even 150 feet away, spin. Spin is not good. In fact, it can kill the subject.
So the helicopter speeds up to around 60 knots (111km/h) which has the surprising effect of stabilizing the load. It also has the following surprising effect on my face, simulated here by screen caps from the movie Fat Man and Little Boy (the Trinity Test scene): 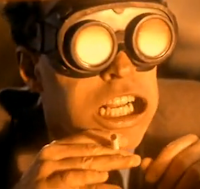 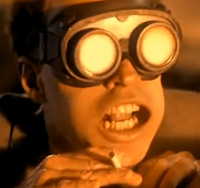 So you can see how I would be concerned not only that my harness won’t fit over my giant blue uniform, but that it won’t be quite the aerodynamic piece of clothing that my regular orange Arcteryx Alpha SV (complete with SAR logo embroidered).

Now, we have been told several times both verbally, in email and in print that there will in fact be logo police in the venues and they will be checking for violations. This has become almost comical at times with missives being sent out that state that we can not bring food into the venues in their original wrappers, including drinks, and that we would be required to unwrap any items or throw them away.

However, we can drink as much Coke as we like.

In other news, one of the guys who is on the crew at the Olympics recently participated in the rescue of an out of bounds skier at Revelstoke Mountain Resort:

And here is another video of a skier crashing; this time it is Czech Filip Trejbal at the Turin Olympics.

He flew off the course, colliding with the end of the first row of safety netting, which deprived him of his skis and sent him spinning into the second row of netting. He lost his helmet there and slid down the hill on his back with various pieces of equipment sliding along with him. It was indeed a horrific crash, but Trejbal somehow staggered to his feet.

He was carried off the course in a stretcher and transported to Turin for medical treatment, but a Czech Olympic committee spokesman, Jan Martinek, said Trejbal had not suffered any major injuries.

We can only hope that all crashes end with no injuries.