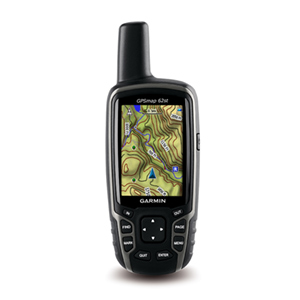 Ever since I saw my  first mapping GPS I’ve been pretty critical of them (well, those that know me know I’m pretty critical about everything). To be clear I’m not critical about the basic utility of plotting your position on a map; that is a great leap forward. Neither do I have any trouble with accuracy and all that; it’s an issue, especially the user’s propensity to take the position plotted as true despite the estimate of error that some devices show you, but in general GPS units are far more accurate than most people need.

This is the problem; the map is really really small.

A real map, even when folded, is much bigger and of a higher resolution than any mobile device. As such, the fidelity of the image is greater, contains more detail, and most importantly, places that detail in context.

The basic operation using a map is to find out where you are. It’s clear that a set of geographic coordinate do this nicely: they encode where you are on the globe. However, as humans this information is almost impossible to interpret. How humans find out where they are is to put their position in context to other places they know. From this piece of relative information we usually figure out how we got where we are, and then how to get where we’re going.

In the words of Captain Kirk; “Everybody remember where we parked.”

This is where the digital map comes in; it shows us where we are in relation to other things, including where we’ve been before and how we got to where we are now. This is the value of having a track (a connected line showing the recorded path we to to get where we are).

There’s no doubt that the mapping GPS units excel on showing us where we are, and plotting how we got there. Where they fall down is in showing us the context.

With a GPS unit we can zoom in to see the detail of the area we’re in, pan to see things nearby, and zoom out to see the bigger picture. What we don’t see is the context at all scales that a paper map can give. Our eyes excel at picking out detail when we focus our attention on an area, while the peripheral vision shows us the context. The eyes flicker, focus, move again and focus, showing us detail, context, and detail again, building up in the mind a “persistence of vision”: or a metal model of the map. Once we have this mental model of where we are, and where other things are in relation to us, we can make navigation decisions such as which direction to go, which way to turn, how far to walk, what landmarks to expect, and how to know when you arrive.

The small screens of the GPS units with resolutions under 76 dpi and sizes of just a few inches make this detail-in-context mental image building extremely difficult.

Of course don’t just take my opinion for it. Most of this is backed up by years of research into human perception. For example, in a paper published in 2008, researchers found that pedestrians using GPS units travelled slower, made more errors, showed less knowledge of their route and generally reported the task of navigation as being more difficult than those using paper maps. Journalist John McKinney writes more about the issue in this article. Note that these navigations tasks were performed in an urban setting which is rich in landmarks (in the form of street sign) and has a regular layout. You can imagine how this task would be made more difficult in the backcountry when landmarks are often mountains and rivers that are kilometres away.

To read more about the detail-in-context problem, especially with regard to GIS and mapping you can look at research my friends have done in the area (links from these papers can take you to other research if you’re interested: the generalized detai-in-context problem applies to many areas of human computer interaction)

Dr Fraccia is my 3D mentor, Drs Cowperthwaite and Carpedale are friends I worked with at the SFU Graphics Lab, and Drs Dill and Bartram were working at the lab while I was there.

The upshot if this is that GPS devices cannot completely replace the utility of paper maps. paper is higher resolution and is clearly better at providing the detail in context that humans need to be effective navigators. There is no debate that GPS units greatly enhance the ability to navigate especailyl when used in conjunction with the map.

Now the really sad thing is that with the advent of digital maps, many governments including Canada have flirted with the idea of discontinuing the publishing of paper maps.

And if you take nothing else from this post, remember that maps don’t need batteries.