Saturday August 28th dawned clear and cool. I attended Squamish command at 07:30 to prepare for the day’s task. By this day, the 12th of the task, the command centre was operating like a well oiled machine; three command trailers, one for command, one for communications and one for planning. A large garage for searchers to gather, eat and decompress. A sign-in area, a proper and complete briefing, and really good maps of the search area. 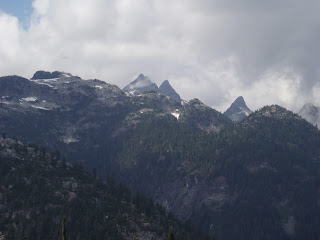 After a large group briefing we were assigned our individual task; I was asked to take a tracker and another Coquitlam SAR member back to the area of DeBeck Pass and Lake 882 where I had searched before; we were to “close the door” on these areas with the tracker —  with his help we would, hopefully definitively, rule out Tyler’s passage through these areas into the DeBeck and Coquitlam drainages.

Our flight in took us to LZ 8, where I was dropped on day three of the search, and we proceeded to “sign cut” for the next several hours. The task of sign cutting is walking through an area looking for signs of human, or other passage. The skill in sign cutting revolves around detecting the sign, and determining whether it’s human or animal, and further, whether it is the particular human you are looking for. The tracker in our team took the time to point out sign that he detected, and told us how he differentiated between humans and animals, and the age of various tracks.

Since searchers had been in the area previous to this day, we did find sign; all of it was of searchers with proper footwear (mountaineering boots, with lugs) rather than the trail runners our subject was wearing. We also saw lots of animal sign.

People have a way of walking through the bus, just like animals do; we tend to choose the easiest way through the bush as is only natural. Experienced backcountry travelers try to determine how hard the going will be based on maps, and air photos. However, once you’re on the ground, it becomes a series of simple choices tempered by experience and a general direction of travel. 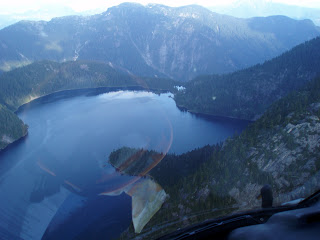 Inexperienced travelers tend to get “sucked” into creek beds. These are tempting, because in low water times they are like very rough roads through the wilderness, and hopping rock to rock is much easier in most cases than pushing your way through the bush. However, creeks erode the land around them and when you follow a creek, most of the time you end up in  a gully system of some sort. In fact, most of the truly lost people we search for are found in creeks and gullies.

Moving on to task number 2; we were picked up at an LZ and taken to Lake 882. This lake lies in a pass between Bull Creek and the Coquitlam Watershed. I had searched this lakeshore on the previous Saturday, and our task this time was to search it again with the tracker in order to “close the door” on this pass.
This is an extremely important concept in SAR; defining the search area. The task of SAR is to divide the world into the Search Area, and the Rest of the World (ROW). It’s important because in order to make the best use of resources you want to concentrate searchers in areas where the subject might be. By searching this pass with the tracker we hoped to be able to rule out hundreds of square kilometers of the Coquitlam River basin, and to concentrate the task to north of this point. Being a short, narrow and very steep sided pass, this was the perfect place to trap tracks of a passing traveler.
Note that not only had I searched this lake the previous week, ridges to the east and west had been traversed, the lake shores had been searched by another team, and still other teams had traversed the pass to the west to near Disappointment Lake.
Needless to say, neither the tracker with us nor any other teams found any sign or clue near this lake. Our tracker reported that it was highly unlikely that anyone had passed this way in the time our subject was missing. Strangely, due to pressure from the family, several teams ended up searching the Coquitlam River and the DeBeck river later in the week – extending the search to 13 days and making it the longest search in 10 years in BC.
Having completed our second task, and nearing the end of the day we were asked to redeploy back to DeBeck pass, the site of our first search, and to attempt to descend the upper Bull Creek. Some information had been relayed to command from a hiker who had been in the area in the months prior to this search that indicated that the creek was a “terrain trap,” and might be a good place to find tracks. My team located the headwaters of the creek, and descended for a hour and a half, until we encountered several waterfalls that we were unable to descend.
With light failing, we located an LZ, cut some trees to make it safe, and were picked up around 19:00 hours, being the second last team to leave the field that day.
As we arrived back at command, we discovered that many of the teams who had been picked up slightly earlier were on a second rescue of a person with a broken ankle on the Stawamus Chief. This rescue took 2 hours to execute, and SAR members attended a de-brief at 22:00, making this a 14 hour day for most.