On Sunday, August 29th the team was asked to search areas of the Coquitlam and DeBeck drainages. Command was stationed at Grant Narrows. Weather was uncooperative. In an illustration of some of the hazards of SAR work, the first team out was tasked to set up the portable repeater to provide a communications net in the search area. On landing they were immediately whited out, and spend most of the rest of the day stranded on a ridge top near DeBeck Creek. 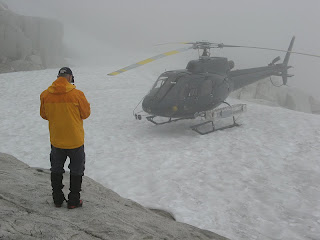 SAR members waiting to be deployed at Grant Narrows were not without work to do however, as a rescue in Golden Ears park was underway. As so many searchers were tied up in the Boise/Bull/DeBeck area, SAR members from Chilliwack, Ridge Meadows, and Coquitlam were sent in to do a stretcher carry of a subject with a broken/sprained/dislocated ankle — the rescue lasted several hours and the subject was flown out when an appropriate LZ was located. 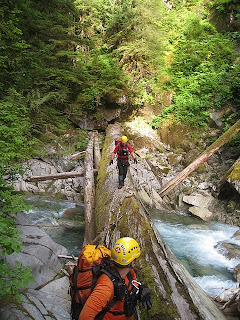 Thursday, September 2nd the team was again asked to go back to the DeBeck and Coquitlam drainages to check out suspected tracks/camping spot seen from the air mid-week. Several teams were sent out and reported no tracks found. Travel in these areas was reported to be extremely difficult, and hazardous, especially near the confluence of Spindle Creek and DeBeck Creek. The task was stood down with nothing found.