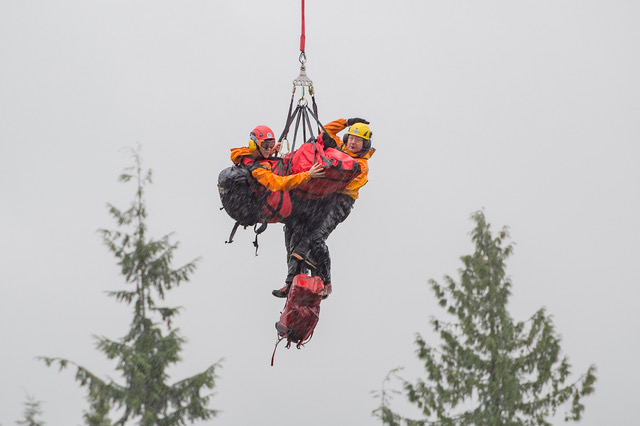 On November 20th my SAR team was paged for a missing dog walker in the Coquitlam area. By luck of the draw (we have a rotating schedule) I was “on deck” – one of the three managers designated by the schedule to handle the call, so I responded.

Out missing person was described to be a female dog walker approximately 50 years old, with three dogs.

The early parts of a response are all investigation related. I call the police (in this case the Coquitlam RCMP), and they brief me on the situation. We usually get a general description including notable health issues, a last known location, and a few other items before we delve into the details. From the short description I knew almost immediately that this would require a full team call-out – not because I thought it was a particularly difficult task, but it because it was very cold out, the missing person had very little equipment, and the weather forecast indicated a massive storm was coming in.

Now just a step back for a moment – while I said above I knew this was an urgent task and would require a full team call out, at the same time I was almost certain that the RCMP would find the missing person very quickly, possibly even before I arrived on scene. This might sound contradictory, but it gives you a lesson on how a SAR person thinks. Even though I thought it was highly likely that this missing person would make it out on their own, I also knew that we needed to respond immediately in case they didn’t. SAR people are always thinking of the worst case scenario. This is a good thing, because that’s exactly what happened.

The area where the person was reported missing is cris-crossed by many trails and roads, and is as busy as you’d expect next to one of the largest urban areas in Canada. It’s very popular with dog walkers, hikers, mountain bikers and off road vehicles. From experience I knew that most of the trails are within earshot of each other. I knew that it would be easy for someone to get lost without a flashlight, but it should also be easy to find them with enough people.

One of the first things we do on every search is bring up a map. The next thing we do is usually open up a cope of Robert Koester’s “Lost Person Behavior”, find the missing person profile, and draw the range rings on the map.

Now that last sentence might sound like a whole lot of jargon – because it is. The Koester’s research took thousands of SAR tasks, and split them into certain profiles like Hiker, Hunter, Gatherer, Mountain Climber, etc. Then, by taking the distance between where the person was last seen (Last Known Position or LKP) and where they were found, he built a statistical profile of how far from the last known position they are likely to be found.

This results in a set of ranges, or range rings. Statisticians usually work in quartiles, or a quarter of the popuation. So we have the first ring at a given distance from the LKP labelled with 25% – meaning a quarter of the missing people matching this profile were found within that distance of where they went missing. Then we have a 50% ring, followed by a 75% ring.

The last ring is 95% because in this statistical districutio there’s always a few people who are found really far away, sometimes thousands of kilometers. This 5% tail is left off the distribution, and is also a reminder to SAR personnel that it’s always possible for someone to be found in the “rest of the world”.

Along with the statistical model of the missing person, Koester also supplied a written profile of the lost person behaviour category – including some insight into the basic motivations of people in that profile, their general behaviour, what equipment and goals they are likely to have, and other insights. Bob also provides some investigative questions to ask, and a list of “reflex tasking” that gives a SAR manager some immediate information they can act on.

This profile is very useful for people who many not understand the particular sport or recreation that the missing person is doing, and even for those who do it’s a good reminder of the state of mind and particular quirks thos people may have.

An example is the gatherer. This profile covers people looking for food such as berries and other wild food, and includes mushroom pickers. Part of that profile indicates that the person will come back to a particular area again and again, but may not tell anyone where they are going especially if the item they are gathering is of economic value. They’re often afraid that someone else may discover and steal “their” crop.

However, there is no profile for dog walkers.

Our team has rescued a lot of dogs and dog walkers over the years, so we’ve become quite familiar with how they think. I’m even more familiar than most because I’ve had dogs for quite a few years now, and one of my very early posts on this blog is about me getting lost while walking my dog near Squamish. I’ve experienced exactly how someone gets lost, and I know the habits of dog walkers from my own social circle.

So we used the Hiker profile, and I put together a short briefing of what we could expect from a dog walker like our missing person had been described.

In the month and half since the search I’ve been working on a more complete dog walker profile including a behavioural analysis, investigative questions and initial taskings like Koester does in Lost Person Behavior. I’m attaching a link to that document at the end of this post.

The events of the rest of this search have given me enough fodder to cover blog posts for the next decade, but I’ll just summarize the rest of day 1 here.

By about midnight on Monday night I realized that this search was not going to resolve quickly like 99% of the other searches we respond to and that this was a one in 5 year event. Basically, we had enough of our members out, and enough time to cover all of the major trails on Eagle Mountain and also had begun to cover areas between the trails.

Our level of coverage made me confident that a conscious, mobile person would have been found by a combination of our searchers and the RCMP dog team that had been searching the area.

Around midnight we began planning for our second operational period, and activating our mutual aid resources – which essentially consist of the other SAR teams in our area. I lined up a SAR manager to take over the next day, and put together a set of tasks for him to set into motion for the next day. 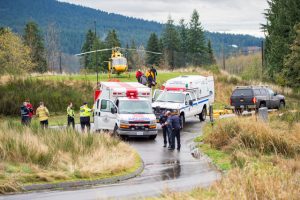 As most people know, the missing dog walker was found around noon on Wednesday, on day three of the search. She was hypothermic, unable to walk, and required six days in the hospital to recover. It’s the largest search we’ve done in our area since 2012 when we managed a search for two developmentally disabled women near Sasamat Lake, and one we will be thinking about for a long time to come.

This work is licensed under the Creative Commons Attribution-NonCommercial-ShareAlike 4.0 International (CC BY-NC-SA 4.0) – you are free to share, and adapt this work for non commercial purposes as long as you properly attribute the author and release your work under the same license.

Attribution should include the author’s name, and a link to the web site Oplopanax.ca