↓ Skip to Main Content
Home › Blog Entry › On getting lost

The couple left their house to walk the dog in the late afternoon, a little later than they had intended. It was winter, and the day had got away from them, but the dog needed a walk. They began on a route they had taken a hundred times; down the street and onto the local trails. In need of some exercise themselves after a long day indoors, the couple decided on a more strenuous route; to the top of a local hill known as “Crumpet.”

The effort of walking uphill began to feel good; the weather was cool and it had been raining for the previous week almost steadily, so being out in the world with a little sun felt great. Sweating as they ascended, they decided to continue to the hike over to the main summit of the hill. As they progressed, they had to scramble across a few exposed slabs of granite. Being experienced hikers they thought nothing of it; however a few of them were very slick with moss and lichen, and took quite a bit of effort.

Reaching the one of the summit areas they took some time enjoy the view and snap a few photos. Then it hit them; the sun was setting!

A minor situation; they were approximately 40 minutes up a trail, across several granite slab areas, and it was getting dark. A quick look into the pack revealed that the headlamp that normally lived there was temporarily in another pack. They had a power bar and a digital camera.

Now on the face of it, it’s hard to believe that these two fairly experienced hikers did not immediately retrace their steps. That fact is they did not. 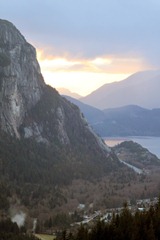 It seemed to make sense at the time. Going back over the slabs felt dangerous, and it was possible that there was a shorter way back if they proceeded along the trail a little further. Once descending, the slabs would be behind them and the trail possibly lead to the road which would make an easy walk home.

It got darker, and finding the trail became more difficult. The couple began to rush –  use the failing light to make the best possible time. They began to panic a little. Knowing the terrain as they did, they realized that even through they were under a kilometer from home, the area was filled with cliffs and granite slabs just like the ones they had already crossed. Without a flashlight they were going to have a tough time.

And then one of then turned an ankle.

Just a little, but enough to cause an “Oh Shit” moment.

Now to clarify, the couple had a smart phone with a GPS on it, and could easily see where they were in relation to where they needed to be. However, the problem was the map on the phone did not contain trail information. Useful for positional information, but not useful for navigation.

In addition, they could easily call for help. However, being so close to their home they felt that this would be a very embarrassing prospect. Even more embarrassing for a reasons I will reveal in a moment.

By now it was dark, and the couple had tried a few false starts in an attempt to get off the hill. Calming down a little, they began to move slowly, feeling with each step. In the dark, the only way to know you are on the trail is by a hundred subtle clues; a very small change in texture, hardness, lack of vegetation. A small change in the hue of the dim light. Step by step they slowly made their way, using instinct, and a modicum of skill.
Finally, after about another hour of travel, they made it onto a part od the hill they recognized from a previous walk. A little crashing through the bush, wading knee deep across a seasonal creek, and a 10 minute walk down the powerlines brought them home.

The couple was myself and my partner, and this happened in February this year, during the Olympics. The story as presented is strikingly familiar to most stories that people tell after we rescue them; the list of mistakes, the feeling of being lost (or in this case, knowing exactly where you are but being unable to travel), the feeling of panic, the embarrassment of having to call for help.

I’ll continue this line of thought in part 2 of this post.

0 Comments on “On getting lost”