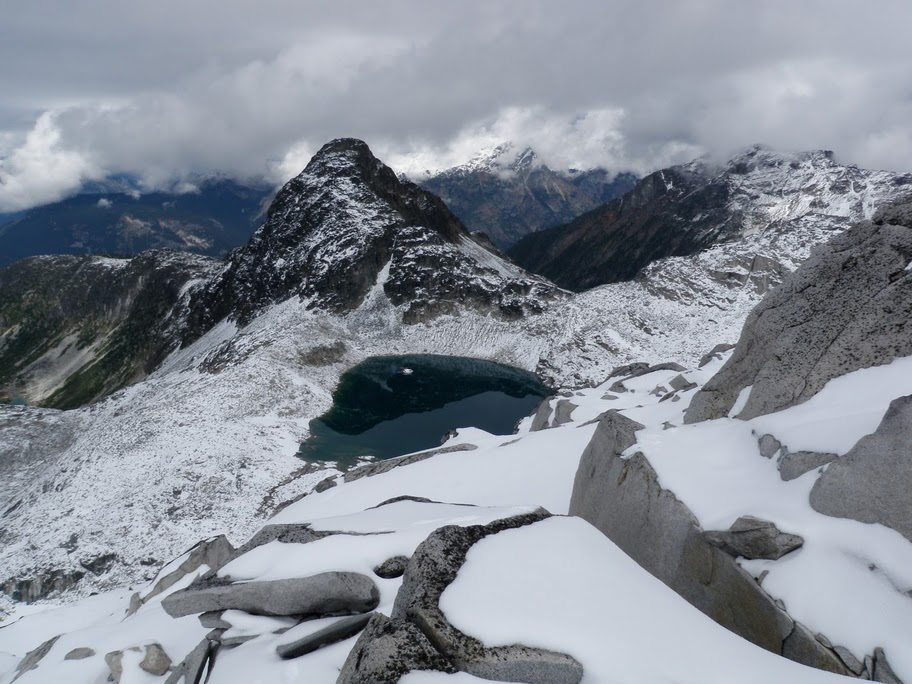 On Monday September 13, 4 team members were able to join the ongoing search near Pemberton, BC for a missing couple in the Saxifrage/Cassiope area of the Cayoosh Range. Our briefing showed us areas of interest, where the car had been parked and included some information about where the couple may have been headed. It seems that they did not leave details about their proposed route, nor was there firm information on their equipment. Our team was to search a glaciated area near Mount Gardiner, to the north of the primary search areas, of interest because it had not been searched, and could be used as an access or egress route. We were asked to look for camp sites, tracks, packs debris or signs of any kind.

My team of four was dropped off on a ridge at approximately 2400m. 20cm of snow had fallen in the previous few days, and snowline stood at  2200m. Snow on the ridge made travel quite difficult; voids and gaps in the boulders were covered in drifts of snow, and holds were invisible. We moved along the ridge to scout access to the glacier and to better view the area we were to search below.

The glacier fell quite steeply from the summit of Mount Oleg, 400m to the cirque below. Many large crevasses were visible from our vantage.

We made our way along the ridge and quickly determined that travel was too risky with the new snow. In dry weather it would have been an enjoyable scramble to the end of the rock rib, but on further reflection I think that both sides of it had been eroded by glaciation, and the only way off was a rappel.

Once on the glacier, and roped up, we discovered the other major hazard; crevasses. Kind of a no-brainer, really; the new snow had effectively bridged, and made invisible, any crevasses smaller than 2 feet wide. And believe me when I say this: we found every crevasse on our descent. Myself and my pack weigh 275 lbs, and the snow was not up to the task of supporting my weight.

Many small sloughs were observed, some of them propagating, indicating a weak bond between the old summer snow/ice and the new snow.

Once at the toe of the glacier the four team members spread out to wander through the cirque. This kind of searching is called “purposeful wandering” — a descriptive term for what is basically allowing a searcher to wander an area and use their intuition to look for clues. In this case, we walked the floor of the cirque, filled with clay-like glacial till, moraines, several small eskers and many erratics. Tracks would be easily visible in moraines and till because of their loose, unconsolidated nature. Erratics make good paces to stash a pack, or build a shelter. Sandy “soil” near the creek would make a good place to camp.

We did find a set of tracks; those of a searcher from the first day of the search near the outflow of the cirque. After flying back to the SAR base, and comparing notes with other teams we heard stories of rockfall almost hitting one team, and a lot of looking into bergshrunds. After spending 14 days on the search for Tyler Wright earlier in August and September, many members of the team were unable to take more time off work to attend this search mid-week. While every single member of the team attended the Wright search at one time or another, many of them for multiple days, only five members were able to make it to Pemberton for this one.