On Avalanche accidents in BC 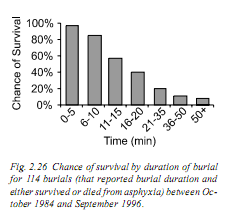 It’s winter, and for some people that means snow sports. For SAR teams that means avalanche training.

Here is the cold hard truth: if you are caught and buried in an avalanche, unless you or a member of your party digs you out, you will most likely die. In the graphic to the left, you can see the chance of survival by duration of burial  (graphic and statistics from Avalanche Accidents in Canada Vol4 1984-1996). Note that after 20 minutes approximately 50% of buried subjects who were not already deceased from trauma asphyxiated. 32% of avalanche victims died from the trauma alone, 68% from asphyxiation. The survival times over 50 minutes are almost all comprised of outliers who managed to find a large air pocket, or were buried in a building, vehicle, etc..

SAR Teams certainly train to rescue people from avalanches, but the chance that the person they rescue is the subject of a search is vanishingly small. Much more likely is that they will be ready to rescue a SAR member, or to rescue a subject after they have been found in the course of a search. The mechanics of avalanche rescue for companion rescue are almost always used within the group that caused, was involved in, or witnessed the avalanche itself.

Organized avalanche rescue is, sadly, composed of gruelling, physically demanding and grisly work of finding bodies buried and frozen in avalanche debris. A SAR team’s response time is far in excess of 20 minutes unless they are already on the scene. When we get the call to attend an avalanche it usually means we’re going in to pick up a body, possibly several days after the event (After the Grouse Grind avalanche in 1999 one of the victims was left in place for several months until it was safe to remove them.)

However, avalanche accidents are deadly, and they kill large groups of people. The death rate for all Land-based SAR operations since 2003 is 4.4%. The death rate for all tasks with avalanche involvement is 22.9%, which is huge considering that we are including tasks that mention avalanche hazard, but for which no avalanches actually happened. The average number of subjects per task is 2.26 where the average for all tasks is 1.41 meaning the size of the groups involved were about double that of the average.

I am in the process of breaking down each PEP avalanche accident into mode of travel and other interesting information, but the message the numbers tell is clear; even though an avalanche response is a rare thing, when we are called it is for serious accidents that involve death.

If you’re going to go out in the snow this winter, the least you can do is take a course (you can take a simple online training course), carry an avalanche transceiver, probe and shovel and know hot to use them (rent them from MEC), practise transceiver and self-rescue skills,  pay attention to the avalanche bulletin, and use the Canadian Avalanche Association’s trip planner to see information on avalanche terrain rating for the area you intend in visiting.