We got an update on the details from Logan yesterday, Josh, the organizer of the trip, called Rollie, another team member. In Rollie`s words:

I just got a call from Josh. The Logan crew has returned to Haines Junction, Yukon. They did not summit but gave it a good go.

While on the mountain, at 4800m, another orange Arc`teryx jacket walked up to the group. This orange jacket was descending after a successful summit.

Josh/Metchild (another member of the team) met Mike Neilson on Logan.  For the members who don’t know Mike, he is a former Coquitlam SAR member who left BC to be a (Canadian) air force SAR tech in Nova Scotia.  He was one of the first two direct entry applicants to the SAR tech program in Canadian history.

There is a photo coming of mike and josh at 4800m with the Coquitlam SAR flag…..

Here’s a photo of mike from a few years ago (2006) when I was training with him for the SAR Mountain Rescue Program (he is on the right in this photo): 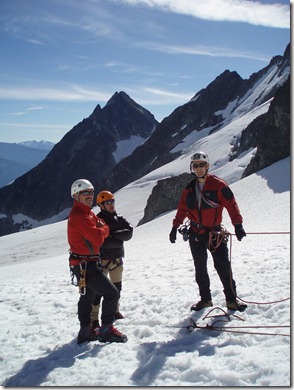 Mike really did make history, as detailed in this article on the Canadian forces site. I joined SAR at the same time as Mike, and he was already a fire fighter at the time. In fact, he and I went to the same high school!

We got an email from Josh today telling us the reason why they could not make the summit.. In Josh’s words:

Indeed, we are back (in Whitehorse anyways). It was a good climb but in the end the altitude was the deciding factor. Despite having climbed successfully at greater altitudes before, my ventures over 5000M on this trip were accompanied by acute pain in my upper back and a bit of blood in my spit (early onset HAPE, perhaps made more susceptible by recent hypertension?). While it was initially disappointing, it’s also a good learning experience.

After a five day delay to get on the mountain, we spent two awesome weeks on rope, travelling glaciers and negotiating icefalls, practising our anchor building and crevasse rescue skills. Our UK component to the team summited Prospector Peak at an elevation of 5644M.  Meeting Mike at 4846M was also a pleasant surprise, he wanted me to pass on that he misses the team greatly. Photos and stories to follow. Cheers.

You don’t want to mess with pulmonary edema, especially on a self-guided, unsupported trip. Rescue high on Logan is notoriously difficult.

Meeting former SAR member, Cpl Mike Neilson was a nice coincidence. It’s great to hear that at least one member of Coquitlam SAR, although no longer with the team, is still carrying the flag.

If I get some photos from Josh I’ll post them here, but that’s the last news from the field on this year’s Mount Logan trip.