The Fox 40 whistle and bird calls 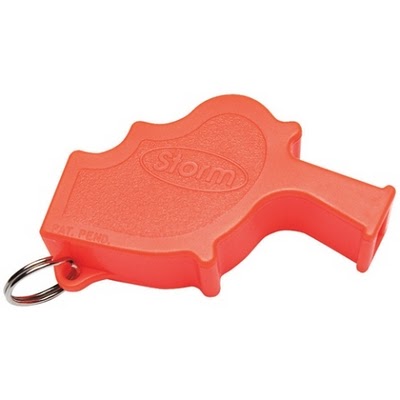 On TV when someone joins the police they hand them a badge and a gun. In BC, when I joined SAR I was given a pager, a compass, and a whistle.

The brand we use is the Storm whistle; a huge monstrosity in orange plastic that has the ability to damage your eardrums if you blow it without plugging your ears. Which is what we do when we’re looking for someone in the bush around here — the whistle blasts travel a lot further than voice, and you don’t get hoarse from yelling. Hikers, however, are usually carrying the more common and popular Fox 40.

As an aside, I was surprised to learn the Fox 40 was invented by a Canadian; the whistle came about because of an embarrassing whistle malfunction while refereeing the Gold Medal basketball game at the 1976 Summer Olympics in Montreal. Ron Foxcroft invented a pea-less whistle which still bears his name.

The Fox 40 comes in many colours, including a glow-in-the-dark version that we give out when we teach the “Hug-A-Tree and Survive” program to various groups. Which brings me to my point.

After a whistle blast, we pause and wait for the subject to blow a whistle in return, if they have one, or to yell. So for those few seconds after a whistle blast, the entire team of three searchers stops, and listens carefully for a return. Hearing the lost person calling or whistling back to you through the dark is one of the nicest sounds a searcher can hear.

However, starting about an hour before dawn on the south coast, there’s a bird that begins to call that sounds just like a fox 40 whistle. In the SAR community (at least the local one in the lower mainland), we refer to that bird as “the Fox 40 Bird” because it drives us crazy. For that period of time just before dawn, it makes whistle blasts almost useless because every bird sounds like a distant subject blowing their whistle in return, except presumably the subject would be blowing more frantically.

Not being a bird expert, I can’t be certain of the following, but I went to the trouble of trying to identify the bird that makes this noise. I think it’s the Varied Thrush. You can hear the sound it makes on this web site, just under the “Identification” section.

It’s a pretty common bird; by the picture I recall seeing it myself many times.

If anyone has any more learned insight into this, feel free to comment.

3 Comments on “The Fox 40 whistle and bird calls”