Getting your symbols right 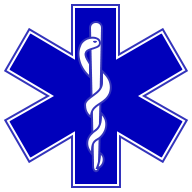 the Star of Life

Most SAR members are volunteers. You’d think this would excuse us from being less than professional but it doesn’t – it means we have to train to professional standards. It also means that it’s important to pay attention to small details, and to get things right. Getting things wrong can kill you.

That’s why it always bothers me when people get the small stuff wrong, even when others would say “it doesn’t matter”. I don’t believe that. Being competent is like being alert – you get everything right. Getting things right and paying attention to detail is part of the game.

And so it is with symbols. Consider reading a map. It’s important to know the difference between the symbol for a talus slope and a swamp, forest and field, hotel and helipad. A small error can make a big difference and put lives in danger.

That’s why it bothers me so much when people confuse the Rod of Asclepius, the symbol for medicine, and the Caduceus which is the symbol for commerce.

The confusion between the two is well documented and stems from a series of simple mistakes – the symbols look similar.

The short story is the modern confusion stems from the use of the symbol by the US Arm medical corps since 1856. Most professional medical organizations, being professionals, use the correct symbol, possibly because

…professional medical organizations have more often sought a real understanding of the meaning of the two symbols whereas commercial organizations have been less interested in the historical basis of their logo or insignia and more concerned with how well a certain symbol will be recognized by the iconographically unsophisticated audience they are trying to attract to their wares.

The irony is that the historical significance of the Caduceus was to represent commerce, which as we know in the United States in particular has caused medical care to be a focus of much debate, as the US medical system is the most expensive in the world, largely because of its for-profit nature. Other associations of the symbol include thieves, liars (or deception), and gamblers.

The Rod of Asclepius on the other hand is unambiguously associated with the god Asclepius, a patron god of medicine and healing. His daughters were Hygieia ,the goddess/personification of health and cleanliness, Iaso, the goddess of recuperation from illness, Aceso, the goddess of the healing process, Aglæa/Ægle, the goddess of beauty, splendor, glory, magnificence, and adornment, and Panacea, the goddess of universal remedy.

The earliest appearance of this symbol is about 300 BCE. The snakes were an important part of the cult of Asclepius, and the original version of the Hippocratic oath included references to Asclepius and the other gods of healing.

The Star of Life

The Star of Life is a symbol of emergency services and paramedicine and features the Rod of Asclepius. The star is a very modern by comparison, having been trademarked in 1967 by the American Medical Association, and was adopted because the Red Cross who wanted to protect the international symbolism of their symbol for the use in war zones. The Geneva Conventions specifically reference the Red Cross as an international protective sign during armed conflicts, indication positions that are not to be attacked.

You can read more information on the protected symbols of the Red Cross/Red Crescent – which underlies the importance of understanding and respecting symbols.

Although the following diagram was probably developed after the adoption of the Star of Life, it’s an interesting way to remember the main tasks of first responders, including Search and Rescue. 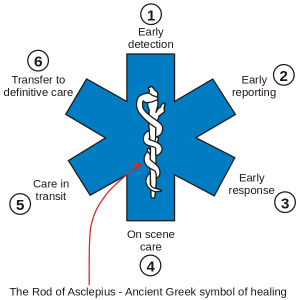 Our lives are filled with symbols, acronyms, jargon and shorthand. If we’re not careful with the small things, we’ll make mistakes with the big things. Maintain your professionalism by understanding all of the symbols of your profession, and their uses.

What about you, what symbols do you regularly see misused? Comment below.