An Earthquake near Tsawwassen, a structure fire on Hamilton Street, a gas leak at Robson and Cambie, and a dirty bomb in Agasiz. Just another day in Excercise Silver. 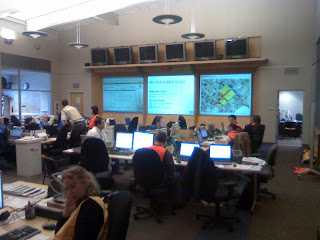 Silver, the second in the series of preperatory emergency excercises leading up to the Olympics (Bronze, Silver, Gold). Designed to test the emergency responses of every agency across the board, and avery agency is represented. I’m in the Vancouver EOC (Emergency Operations Centre) sitting in the planning section and putting events on the map as they happen.
At 08:00 the “players” (that’s us) are given folders containing information about the lead in to the excerise. An influenza outbreak. A severe winter storm with huge fluctuations in temperature. So far just normal BC winter weather. A truck with radioactive isotopes stolen. Threats from radical protest groups. A little more interesting.
And then, and earthquake. 911 is flooded, and nobody can get through, Backup systems are put in place.
Being the Vancouver EOC, I get to see the city’s response. When making a call we’re directed to say “EXCERCISE, EXCERCISE, EXCERCISE” before continuing just to be clear that this is NOT real. We’re also give a code word in case a real emergency breaks out. Bridges are inspected, viaducts and overpasses are ruled as safe.
In the mean time, at the PEP PREOC (Provincial Regional Emergency Operations Centre) in Surrey, they’re supporting emergencies on the provincial scale. Greahoud bus hits military vehicle on the Sea to Sky, disrupting traffice to Whistler Olympic Venues. The Stawamus river floods, damaging the dike and 700 people are evacuated from Valleycliffe in Squamish. A mudslide on Lillooet Lake road cuts of access to several First Nations communities. A fire in a warehouse.
People all over the province are scrambling to deal with simulated emergencies. Communications networks are being tested; who do we call, what do we ask for, how to they report back. The ECO and PREOC are tasked with coordination, information sharing and support for the incidents and the emergency responder at the scene. The police need to know where the fires are so they can close the road. Engineering needs to know where the power is out, and Emergency Social Services (ESS) need to coordinate where to move evacuees and how to supply them with food and water.
Oh, and the Olympics. The show must go on.