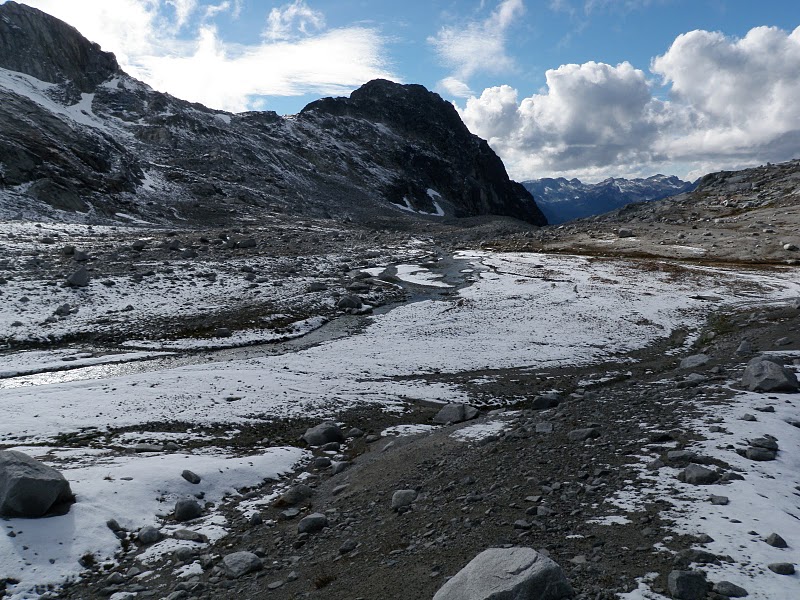 The lower cirque with glacial features

Phil Tomlinson, the current president of the VOC, composed a detailed and thoughtful response to my previous post. He had some trouble getting it into the comments, so I thought I would reproduce it here.

Hi Michael,
As the current President of the VOC I figured I should attempt to address some of your concerns and try and explain where we’re coming from.

First up, please feel free to email or call me directly if you have concerns about our activities in the back country. We strive to maintain positive relationships with all the groups and individuals that we share the wilderness of BC with, so if you’ve got a beef, we want to hear about it. You can find the general email address for the club on our website (www.ubc-voc.com) and I’ll let the people who monitor it know that if they get an email from you, they should forward it right along to me. I’d post my email address and phone number here, but you know, spam bots are a pain.

We’re very conscious that a giant horde of people can cause significant environmental damage and for that reason we run only a couple of ‘mega trips’ per year. In the fall, we have Long Hike, which is an instructional climbing event and Glacier School, an instructional event on glacier travel and rescue.  For Long Hike, our largest trip of the year, due to the size of the group, we have everyone stay at a commercial camping facility in the Squamish area where there’s no wilderness to destroy.

For Glacier School, the Anniversary Glacier is a popular destination because it is close to the cars, which means that when we get there, we have time to provide instruction on glacier travel and rescue techniques. Recognizing that the effect of having a large group people going to the bathroom all over the place would be terrible, all participants are expected to pack out their waste.

Winter Long Hike is our final big, annual event and takes place the first weekend in January and is the trip you just encountered. It provides instruction and practice on building snow caves, which can be a crucial survival skill in an emergency. Once again, the giant horde is broken up into sub-groups of three to five long before they arrive and everyone is provided with biodegradable human waste bags in order to minimize environmental impact. During a mandatory pre-trip meeting, it was explained to everyone how crucial it is for large groups such as ours to be on our best behaviour and it was further explained how crucial it was to collapse all snow caves before departing. While this doesn’t ensure 100% compliance, we had club executives attempt to make sure the site was as pristine as possible upon our departure. The big thing though is that the trip takes place when vegetation is covered in snow. We aren’t trampling sensitive plants and we intentionally pick high traffic areas for our ‘mega trips’ so that if we do cause any environmental damage, despite our best efforts, it’s restricted to an already damaged area.

As for safety, as you say, managing a group of 50 to 100 people is impossible and it’s easy for people to get lost or forgotten without anyone noticing. I agree 100%. For this reason, all large trips are broken down into small subgroups. For Winter Long Hike up at Seymour this year, everyone broke up into groups of 3 to 5 and it was made clear by the trip organizer that he could not possibly keep track of everyone and therefore each sub group was responsible for themselves. We were effectively a large group of independent groups. This eliminates the large group safety issue and in fact increases the safety of the trip because if there is a problem, someone gets hurt for example; there are other people in the area that can help out.

Professionalism was your final issue. The limits you discussed are largely arbitrary, though we respect limits whenever they are in place. Last year we asked the rangers of Garibaldi Park if we could hold Winter Long Hike up at Red Heather. Their feeling was that since it was taking place on the same weekend as their Avalanche Awareness Days, there would be too many people in the area and we therefore selected an alternate destination. This year, in contrast, we were called and asked if we would please hold the event at Red Heather since the Avalanche Awareness Days were happening the following weekend. Unfortunately, we had already planned on holding the event at Seymour out of respect for the request of the park rangers the previous year. In light of this, and since Red Heather makes an even better destination that Seymour, we will likely hold the event there next year.  The key point however is that as opposed to being seen by the rangers as an environmental and safety liability, we’re viewed as good guests, something we strive very hard to maintain by keeping open lines of communication with the outdoors community and respecting the requests of others whenever possible.

If we’ve established that we can run safe, environmentally conscious trips, and are welcomed by the majority of the outdoor community and area managers, then we feel it’s reasonable to have a couple of large annual socially oriented trips where it’s nice to have everyone together. For trips that are less social in nature, if they get too big we routinely break them up across a few destinations so as to minimize our impact on other people’s enjoyment.

At the end of the day, our club specializes in introducing people with no experience to the outdoors. Rookie mistakes will be made.  I would argue however that our safety record is something to be very proud of and that we instil in our members from day one that minimizing our environmental impact is crucial. Like I said at the beginning of this far too long reply, we strive to maintain a positive relationship with everyone who enjoys the outdoors, so if, after reading my response, you think there’s still things we could be doing better, I’d love to hear.
Cheers,
Phil Tomlinson, President
Varsity Outdoor Club
University of British Columbia

I appreciate you taking the time to compose this response, and as I said in my post I firmly agree with the VOC, and other outdoor clubs’ current practises of mentoring and training people in outdoor skills. These people are eventually the ones who volunteer for SAR. In fact, with the recent rise of less formal online groups, the outdoor community’s ability to impart the best practises and traditions of the BC Backcountry are beginning to be lost. The VOC’s traditions and history are important to keep alive. But that’s a topic for another day.

When faced with criticism, I can see why the first reaction is to defend the practice. But clearly, 60 to 100 people in one place is not just another school trip, and breaking them into groups of 5 does nothing to change the way this is perceived. The VOC is the only group that I know of that does this. No other outdoor society, club, school, or organization fields this many people in one location, nor would they ever consider it to be normal, unremarkable or standard practice. Common sense would tell them that this is a bad idea.

I think it’s difficult for you to see this because of the tradition. The DNA of a society is in its traditions and its policies; being a president for a year or two in a society that dates back to the 20’s is a heavy responsibility. I can see how changing this would be a difficult sell to the executive and to the members, and even you have trouble with it. However, I think this is an opportunity to show leadership in this area, and protect the VOC’s reputation which I believe is being harmed..

Creating a new policy to limit the size of the groups you take out would be completely reasonable. Any course or trip I have ever organized or been a part of has a class size limit. Even if it were a large number, say 30 people, it would be a limit and it would go a long way toward showing the public, and your members, a certain level of respect, and perhaps a more professional demeanor. It would be a shame if the society were forced into making this change at some future date, rather than taking control of the situation now.