The UBC VOC and Group Sizes 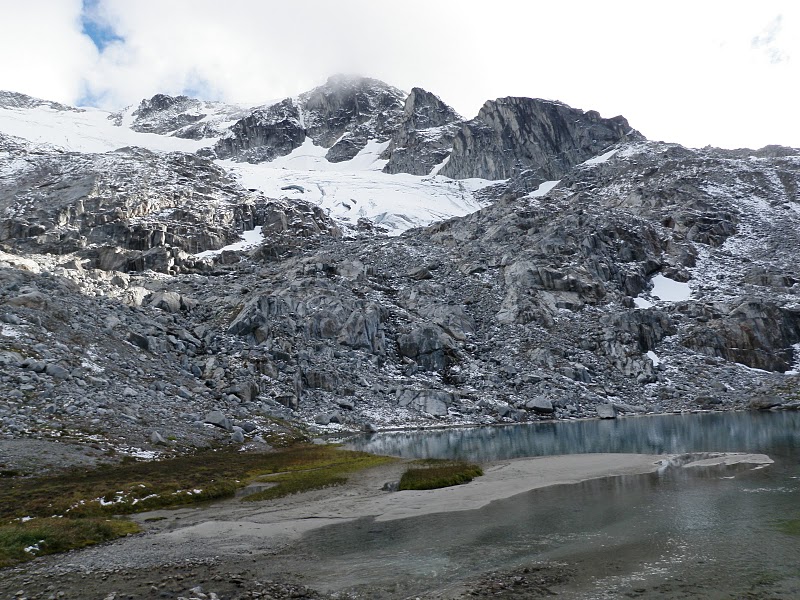 This post is a bit of a rant, so please skip it if you’re not in the mood.

A few years ago a friend and I travelled into the Cerise Creek area for some mountaineering. We were surprised to see what looked like a group of 60 people milling about the trailhead. As we hiked in we asked them what sort of event this was, and found out that it was the UBC Varsity Outdoor Club doing one of their semi-annual outdoor trips.
First off, I must laud anyone who devotes time to teaching others the ways of the backcountry, and how to be safe in it. I do the same with the SAR members on my team, in fact we devote much more time to training than to any other activity.

It turns out that there was between 80 to 90 people on this particular trip.
A few years later I went backcountry skiing into the Red Heather area, another popular recreation spot. As I was meadow skipping back toward the warming hut I managed to fall into a trench dug into the snow – and realized that I had skied into a series of connected snow caves. Again, I found that I was dealing with the VOC. They had organized a trip into the area, and again they had between 60 and 70 people there.

Then this last weekend, I saw a photo my friend took on Mount Seymour; he had come across a huge group of people camping in snow caves. It turns out that there were 97 people in this group. Again, the VOC.

Now I’m not one of those people who head into the backcountry and get disappointed when I find other people out there; don’t get me wrong, it’s not about back-to-nature and some sort of John Muir or Thoreau-like solitude seeking for me. I expect to find other people doing just what I do, especially when I go to places so close to the city, and so popular.
But I do have some trouble with large group sizes.

I must disclose that after my first encounter I took the time to complain to the VOC directly. I figured that a complaint about the size of the group was obvious – huge groups in the backcountry are ridiculous. However, the response from the VOC spokesman, although polite, pretty much discounted out of hand any change in their policy. They said they would discuss it, and “take it into consideration,” but as we can see if anything, the group sizes have increased.

The response cited tradition and the social nature of the event as reasons why they would continue to take large groups. When I suggested that perhaps it would be safer, and better public relations, to break up into several smaller groups and go to different areas, the repose was that this would involve too much overhead.

Any group heading into the backcountry is going to have an impact on the environment. Even walking on plants in the alpine has a effect; the game trails from animals are easy to see. I have an friend who’s family has been the guide/outfitter for the ACC summer General Mountaineering Camp for many years. Recently they revisited a camp site that they had used 50 years ago, and could still plainly see the damage that had been done.

An argument could be made that any popular area is already going to be much affected by the amount of travel, and a few (60 or more) extra people a year isn’t going to make a difference. However, my thought is that if one of your purposes is to teach (which is the stated objective of these trips), one of the important things you should be teaching is how to tread lightly on the environment. 60-100 people camping in one place is not “light” by any standard.

I’ve participated in several clubs over the years, and if you include SAR as a club I have 30 plus years of outdoor club experience, from cubs and scouts, summer camp councillor, university outdoor club, and provincial clubs like the BCMC and ACC. For more than half of those years I have been leading trips and training club members; it’s part of the tradition of outdoor pursuits in BC that you mentor new climbers, skiers and mountaineers.

In all of that time I have attempted to keep my group sizes down. There are many reasons; smaller groups are easier to manage, easier to teach, and much safer when travelling. One example is ascending a slope. In the summer a large group will become spread out, and rocks knocked loose by the leaders gather speed and hit the stragglers. In the winter, the leaders can cause avalanche hazard for those at the back of the pack. Communication, even with a radio, is a huge problem. The logistics are so bad that I would say that any group larger than three is ill advised. I draw the line at 6, and only when I have at least one other experienced person with me.

The few accidents and near misses I have been involved in have happened in groups larger than three, and two of the near misses, winter and summer, involved scenarios identical to what I described above. In one case I nearly broke a leg from a falling boulder, and in the second the leaders caused and avalanche that buried one of the members lower on the slope.

In many things, I try to take my queues from professionals in the field; in the field of outdoor pursuits, these professionals are ACMG Guides. The ACMG as an organization, and as a professional body tries to set standards and best practises for all aspects of outdoor pursuits – many of these become the standards for SAR. ACMG Guides are regularly hired to train SAR members in mountain rescue, and they consult on all aspects of the training program.

In my experience with guides, the group size is of primary importance, for both the reasons I go into above. In my time taking courses and assisting with teaching courses, I’ve rarely seen a group size larger than 12, and then only with two guides and two assistants, making an instructor to student ration of 1:3 or 1:4. Although I can’t find this documented anywhere, I believe holding a group size to under 12, and with the stated instructor to student ratio constitute a best practise in the field.

In fact, on several web sites group size limits are mentioned and specifically enforced. For example,

It’s clear that popular areas have size limits. Guides and outdoor schools have class size limits and instructor to student ratios. They have these limits for similar reasons to what I outlined above: safety and environmental protection.

The VOC is only one example of huge group sizes. North Shore Rescue has had to assist and rescue groups of 30 to 100 people in several circumstances, and I’ve trained with them for these scenarios. Large groups are harder to control, easier to lose track of members, and can easily cause devastating accidents. I submit that the VOC should make it a policy to limit the size of the group when it undertakes it’s traditional hikes. Group sizes of over 20 may have been acceptable in 1920, but times have changed.

If you want groups of up to 100 members and a social setting, stick to parties in town.

The current president of the VOC was kind enough to respond to this post, I’ve placed this letter and my response to it here.

8 Comments on “The UBC VOC and Group Sizes”