Every week the Canadian Avalanche Centre produces multiple avalanche bulletins for many different regions of British Columbia. In those bulletins, they rate the avalanche danger, defined as the likelihood, size and distribution of avalanches.

This weekend there were several avalanche deaths in a single incident which occurred during a period of “Considerable” hazard near Golden, BC. Considerable is defined in the North American Public Avalanche Danger Scale as

(Please note that I know almost nothing about the incidents this weekend other than what I read in the news, and I am not commenting on the particulars of this incident. Rather I am commenting on the danger rating, and what “considerable” means, and why accidents are common when the rating is not high or extreme).

It turns out that most recreational avalanche accidents and deaths occur during periods of considerable hazard. According to the latest edition of Avalanche Accidents in Canada (Volume 5: 1996-2007), analysing 75 incidents since 1997, the following chart shows the trend (chart reproduced from numbers present in the book). 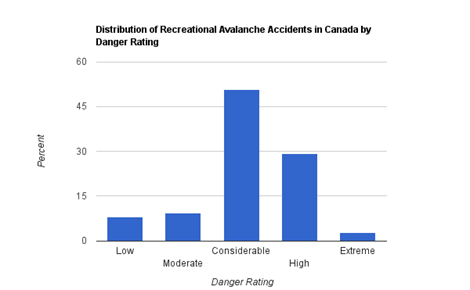 These same values expressed as a pie chart: 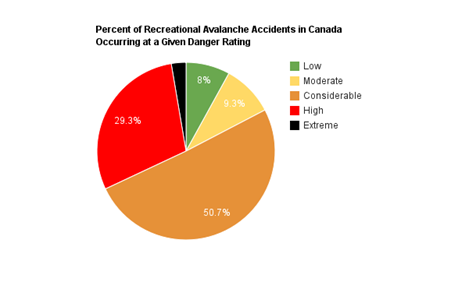 Why is this the case? You would think that higher danger would mean higher risk, and thus more deaths. That assumption is wrong, because the risk of an avalanche accident depends on a person being present, and most recreationists pay attention to the avalanche bulletin. Avalanche accidents in periods of high and extreme hazard are fairly low because there are less people out there.

But why the spike for the Considerable range?

High and extreme hazards are simple to evaluate; avalanches are very likely or certain, and bound to be large, and widespread. The language in the bulletin is clear, and so is the evidence in the field; lots of new snow, and lots of signs of instability. People generally stay out of the backcountry, or play it very safe, sticking to simple terrain.

Low and moderate hazards are also simple to evaluate; the snow is stable, avalanches are unlikely, and isolated, and it takes a lot of effort to find the specific conditions under which you can trigger one. Even completely uninformed, and ill-equipped people will be able to survive these conditions.

However, the considerable rating is different. It lies in the gap between moderate and high. It represents conditions that are hard to evaluate, because while avalanches are generally possible in specific areas, evaluating where, and how large an avalanche might be requires education and experience. In particular, the considerable rating is often used to describe persistent weak layers which may be deep, meaning the likelihood of triggering an avalanche is low, but the consequences are high. This would account for multiple burials like those of this last weekend.

Moderate and considerable are also the most common danger ratings published by the Canadian avalanche bulletins; this alone would mean that they are the most common conditions in the province, and hence there would be more time that backcountry travelers are making route finding decisions in these conditions.

There is also the psychological aspect. Some people will see the orange colour in the report like they see an amber light – a sign to speed up (or “proceed with caution”). Without reading the words behind the danger rating, a backcountry user without training my think that caution is al that is necessary to travel safely, without realizing what “caution” means in the context of avalanche safety. Completing many trips without incident may lead the individual to believe that they re in fact skilled at avoiding avalanches, when in fact they are just lucky. Overall, the considerable rating represents a level of hazard that is higher than most believe it is.

An avalanche danger rating of considerable seems to lead people into the backcountry, and to make terrain choices that result in avalanches more often than all of the other danger ratings combined. It is possible that the reason people make these choices is that considerable is  be the middle of the danger scale, and is interpreted as a more normal condition rather than an expression to be cautious.

Knowing that most accidents happen when the danger is considerable can help; travel under in these conditions is possibly the hardest because it requires the highest level of training and experience to recognize where the hazard is and how to avoid it.