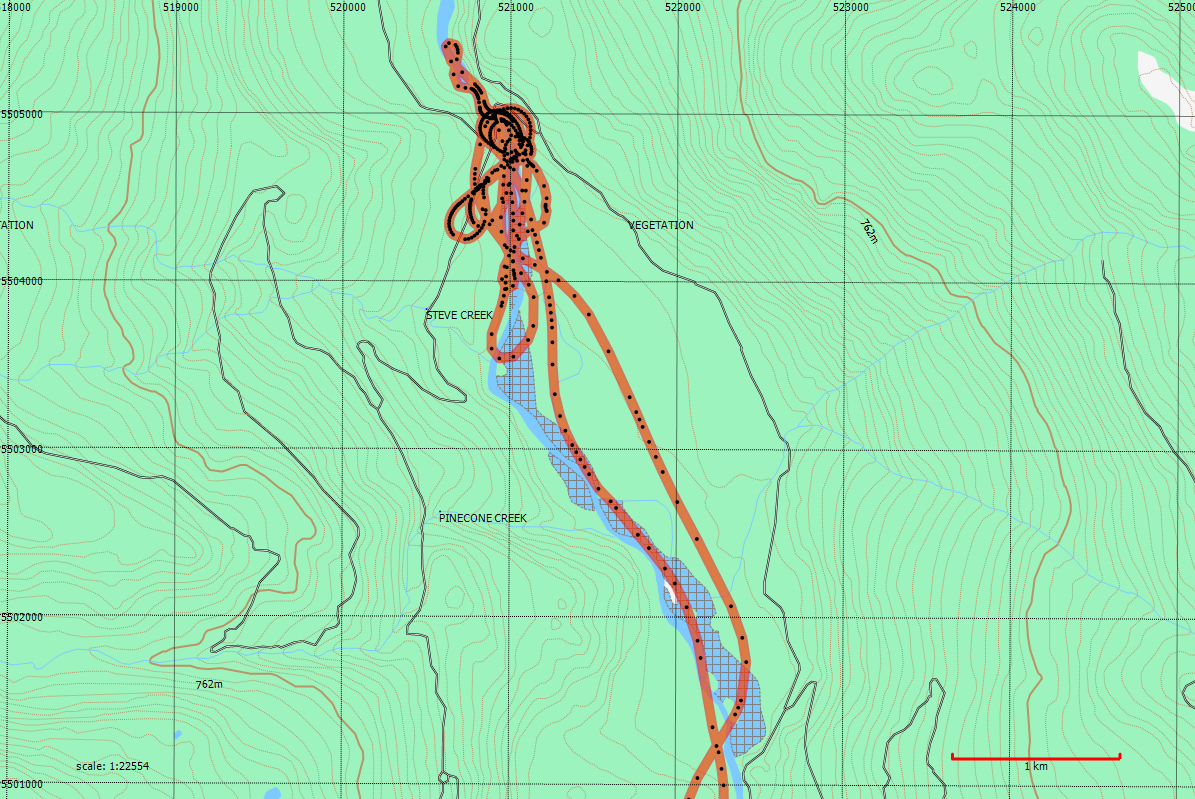 GPS Track of helicopter flight into the Pitt River area.

In my previous post on coordinates, I stated that the best coordinate representation to use if you need to use geographic coordinates (latitude and longitude) was decimal degrees (or DD). It’s preferable to use UTM, which is pretty much a world standard for land based navigation.

A SAR buddy and professional surveyor mentioned a scenario where decimal minutes (DM) would be a better system, which applicable to Search and Rescue; in my previous post I was giving advice to general backcountry enthusiasts, but in this post I’ll make some recommendations specific to SAR.

Ground SAR members often communicate with helicopters and fixed wing aircraft. Pilots tend to use geographic coordinates because of tradition, and the scale of the maps they use is more useful when printed with this sort of grid (i.e.: their speed and range requires a map at a higher scale, and latitude and longitude works for larger scales)Also, converting knots (air speed) to minutes on a map is very simple.

Since pilots are converting knots to minutes (1 nautical mile is the same as a minute of latitude, so 30 knots in air speed is 30 minutes of latitude per hour) they tend to think of the world in knots and minutes. Thus they set their GPS units to degrees, and decimal minutes. When they report coordinates they read this data off the GPS.

Ground SAR members likewise need to understand this when communicating with aircraft – a pilot is not going to be able to do conversions on the fly, and is going to make a rough guess at a conversion if you supply decimal degrees. Ground members should also be prepared to receive decimal minutes from aircraft.

Most modern GPS units, for example the Garmin GPSMap 60CSx, can display locations in two coordinate systems at the same time. It’s a very good idea for SAR members to set up their units so that both UTM (for ground navigation) and geographic are both displayed, or are easily accessible. Most GPS units are configurable in this way, and this should be a feature SAR teams look for when purchasing.

Also in my previous post I mentioned how important it is when reporting coordinates to be certain that the receiver has copied them correctly. I’d like to illustrate the importance with an example.

When a person reports themselves lost, they call 911. In the lower mainland this means they get an operator at E-COMM. This is the person you’re going to give the coordinates to. The operator tries to figure out which local police force to alert, and if they are not sure they send the data to the Emergency Coordination Center (ECC) which is a 24-hour call and coordination center located in Victoria. Either way, the data is copied to the second operator. The police or ECC then alert a local SAR team, and a manager is paged who also has to copy the data down. This means that by the time a SAR manager takes the call, your coordinates have been transmitted three times, each time copied by hand.

It seems incredible, but each time the data is copied there is a change for an error to be introduced. This is why it’s extremely important to be as clear as possible in the first transmission.

Ultimately, SAR members need to be flexible. Unlike most marine and aviation industries, SAR exists in an intersection of different navigation traditions, and you need to be able to handle coordinates in a variety of formats, so you should plan for this. With a GPS such as the 60 CSx you can, through some work, convert coordinates from one representation to another. And most of the time you can get your command centre to convert them for you.

In a future post I’ll show some software that can handle the task of converting coordinates from different systems, datums and representations on the fly.

0 Comments on “On Coordinates; part 2”