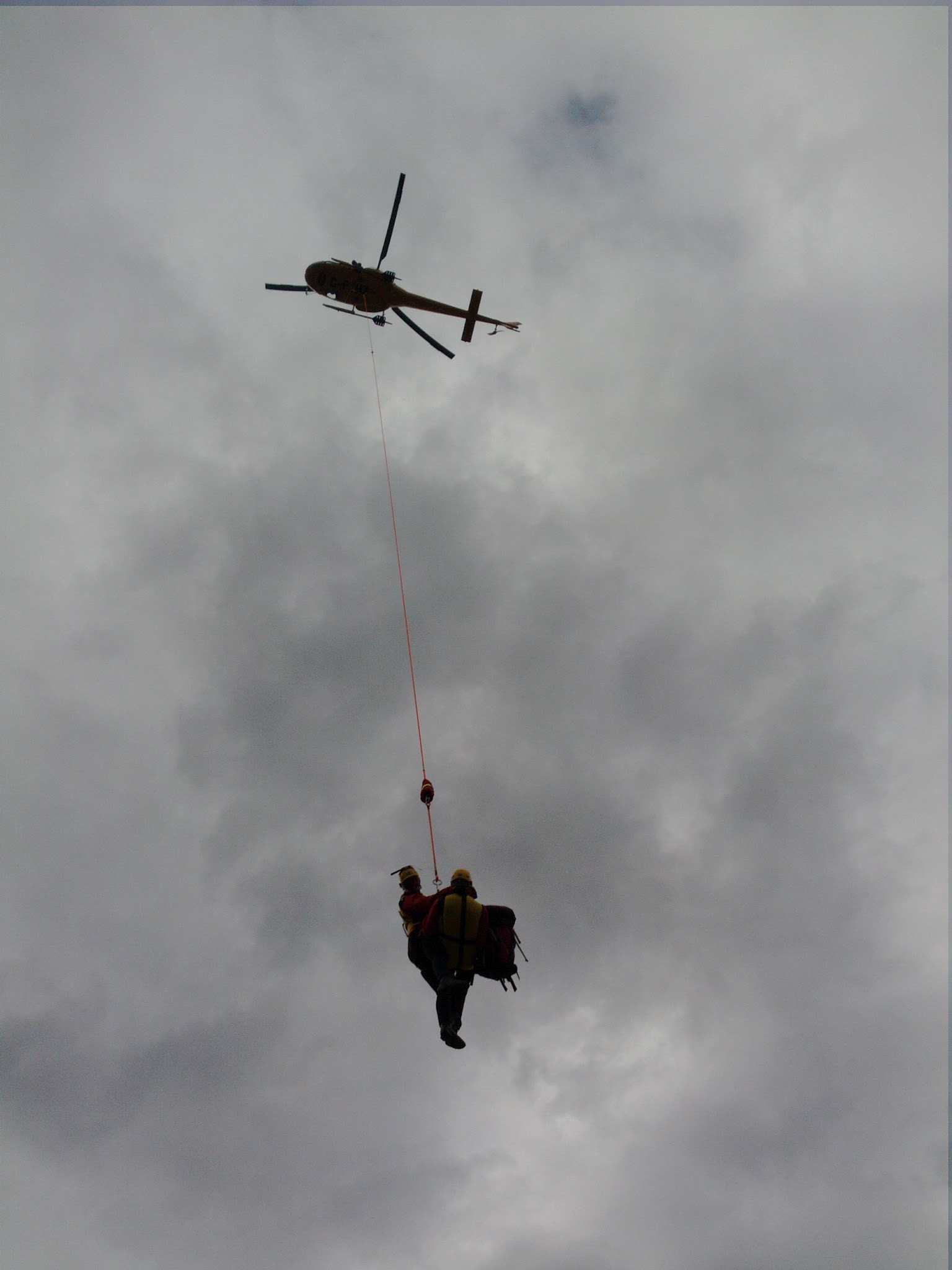 I’ve written about the rescue technique known as HETS several times. Basically it’s a technique that’s perfect for inserting and extracting rescuers and equipment from BC’s forested slopes. Where a helicopter pilot can’t hover or land, they can long line.

Maintaining a certification in this form of rescue requires a yearly recertification, which was carried out with North Shore Rescue last Sunday afternoon. NSR designed a drill intended to exercise several rescue capabilities and skills in a single scenario which included an avalanche rescue component, multiple casualties, two helicopters and a combination of ground and air based rescue.

The scenario was that a group of snowshoers were involved in an avalanche at Dog Mountain on Mount Seymour. A ground based response made it to the rescue site and dug out all of the subjects, several of whom were in critical condition. Helicopter rescue was used to evacuate the subjects because of the severity of their injuries.

Following are two videos I took of the event using a helmet mounted GoPro Hero camera. A minor warning – in the heat of the moment there is a little swearing involved, something that’s common in these scenarios that helps to handle the stress of the situation.

Part 1: the flight from the command area to the rescue scene on Dog Mountain

In the first video, you see me turn on the camera, attach a lanyard to my pack, and hook up to the helicopter which then takes off and slings us into the rescue site, where we detach from the line. During the flight you can see how fast we’re going (about 60 knots) as we climb from the helipad to near 1000m. Also, if you look carefully when I point the camera at the helicopter you can see the spotter or “Essential Crew Person” leaning out of the helicopter to keep us in view (at about 4:30). During the landing sequence you can see the rescue leader on the ground waving a flag to indicate which subject to pick up. The helicopter slows down, and I use hand signals to direct the pilot where to put me down.

Part 2: the flight from the rescue site back to command

In the second video you see us load the “subject” (in this case a dry bag) into the stretcher and the red bag that the stretcher goes into (known as the “Aerial Rescue Platform” or ARP). We don’t take much care with this step because the purpose of the drill for us is the flight, and it doesn’t seem worthwhile to spend additional helicopter time on patient care when we can practice this without a helicopter.

The helicopter comes back, we hook up and it carries us back to command. If it looks windier and sounds louder on the trip back that’s because it is – when the helicopter looses elevation it’s going faster, and the wind effect is quite a bit stronger.

If anyone has any questions about gear and techniques shown in these videos let me know and I will be happy to try and answer them.