Finding Someone from a Helicopter 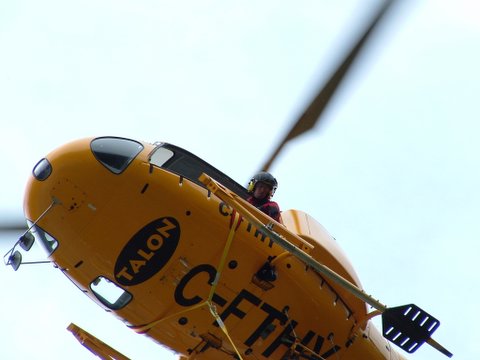 At 4am June 13th, 2007 my pager went off, waking me from a very deep sleep. The pager goes off all the time, but this early in the morning it’s almost always a bad thing. People tend to get reported missing when they fail to return home, so SAR is usually activated early in the night. For a page this late they either weren’t reported missing in the regular time frame, or it’s a mutual aid call to a neighbouring team.

It turns out it was the latter. Ridge Meadows SAR was searching all evening for a 17 year old female subject and her two dogs near Mike Lake in Golden Ears Park. She called for help on her cell phone when she realized she was lost. Teams had been in the field all night trying to find her, and of course her mobile phone ran out of power very early in the search. The SAR manager, realizing that his team members were probably exhausted, needed more people to help in this search. As is common in BC, he called nearby teams under our “mutual aid” agreement.

I arrived at SAR Command about an hour later. Ridge Meadows had managed to narrow down the search area during the evening, but the weather was cloudy and wet, and the terrain gets quite rugged as you head east and west off the main ridge of Alouette Mountain. The teams searching at night have had limited visibility, and could only search a strip as wide as their voices and whistle blasts carry.

Since our team arrived in the morning, our task was to relieve the field teams by replacing them, or getting into areas where they could not search in the evening. The SAR Manager asked me to take a team in the helicopter and try to find a place to land near an area of high probability. He told me that they had done a fairly good job searching east of Beautiful Lake, and he suspected she was to the west. Since the mobile phone no longer worked, they weren’t able to communicate with the subject and could not ask her if she could hear their calls, or see their flares. She also would not be able to report if she could hear or see the helicopter. There was quite a bit of concern about her condition, but also some hope because she had two dogs with her to keep her warm.

It’s not well known that in BC we are not technically allowed to search from a helicopter. We can move people and equipment, but according to the policy we can’t just order a helicopter to fly around and look for someone. Don’t ask me why. Sometimes, such as in this case, it is can make all the difference. So the SAR manager asked me to get a team into the field, and to take my time to find a good LZ, and while I was looking for the LZ to also look for the subject.

I have spent my fair share of time in the bush, and in a helicopter. I’ve been responsible for directing a helicopter from the ground to find me and my team for pickup in a clearing, and I’ve been in a helicopter looking for SAR members on the ground and I can tell you it’s not easy to pick out a person in the bush from the air, even when they are wearing bright clothing, and are directing you to find them on the radio. I thought it was pretty unlikely we would be able to spot the subject under these conditions.

Once I remember asking Tim Jones, a very well known SAR guy, why they even had a helicopter at a particular search under similar conditions – very cloudy, rainy and generally low visibility. His answer was that if the subject could hear the helicopter it would give them hope that we were out there looking for them. This alone is good enough reason to have a helicopter in the air if possible on almost every search.

So up we went, as it turned out, with a new pilot named Kelsey Wheeler from Talon Helicopters. Myself, the pilot, and three other volunteers in a AS 350, flying in the clouds over Alouette Mountain, just about at tree-top level. Peering into the canopy, one eye on the GPS for our position, and one eye on the ground. The first 20-30 minutes we got our bearings between several small lakes, and got used to the terrain and how it got steeper as it rolled into the valley below. The next hour we got very used to the heavily forested cloudy terrain moving constantly past our eyes, all the while trying to stay alert to any kind of colour or movement on the ground.

Well, we found her.

In one of the innumerable passes I spotted a whitish dog sitting in the bush, behind a tree. “It’s a dog!” I said – and asked the pilot to turn the machine. As he did so I immediately saw our subject. She had tied a plastic bag to a 16 foot tree, and was madly waving the tree back and forth. I can still remember the mixture of surprise, elation, and relief that I felt seeing her and the dogs all alive and well! We beeped the loudspeaker to let her know we had seen her.

We hovered there, where we could keep her in view, and radioed to SAR command that we had spotted the subject. One SAR member began getting a GPS fix, while I asked two of the others to take out a small stuff sack from my pack that contained my gore-Tex jacket and pants. To this sack we added some food, water, a toque, a sweater and one of our SAR radios – enough to give her some shelter and energy, but not enough to make a dangerously heavy bag. I opened to door of the helicopter, carefully dropped our care package to the subject, and soon we were talking to a very relieved young woman on the radio.

The rest of the rescue went off without a hitch. We hovered there, talking to her and providing a communications link to the other teams and to command, neither of which were able to hear her on the radio since she was out of range. We told her we had her position, that several teams were making their way to her, and everything was going to be just fine. She’d never spoken on a radio before, so at first she was yelling with the urge people sometimes get to make themselves understood. She quickly got use to radio terms like “over” and “copy”, and over the next two hours she became a pro.

Several teams were sent to her position with more warm clothes, food and water. Both the subject and the dogs were exhausted, so they went pretty slowly through the bush back toward the Alouette Mountain Trail. There they were met by our Argo ATV, so they didn’t have to walk all the way back to SAR command. By then, the helicopter had to go for fuel, so the crew and I were back at base to see her arrive. Note how she says that the dogs helped keep her warm.

One of the most exciting searches I’ve been on, not because of any special techniques or daring rescue, but because it’s the only one where I’ve found the subject from the air.

It’s easy to find people from the air if they are moving. On every search with an aerial component, we pick up and drop off searchers which generally requires the pilot to see them from the air (we can guide helicopters in using coordinates, but the final approach is purely visual). Being one of those searchers, I’ve been in the air and can fairly easily see SAR members in certain types of terrain. On one very large search, we even spotted the same hiker, from 4 different helicopters many times throughout the day. Movement and colour are easy to see from the air.

However, an immobile subject is difficult to see. Last year two hikers went missing in Garibaldi Park, and searchers and helicopters flew by them all day before they were spotted near the end of the day from a glint of light off their compass. In fact, in almost every case where a person is spotted from the air there is a light, some motion, or some other attractant such as smoke, or large tracks, to guide the helicopter.

Finally, an immobile and unresponsive subject is so difficult to see that it is merely luck when we fond them. In a search in the alpine area near the Stein Valley several years ago helicopters flew past the body of the subject for days before a SAR crew identified it from the ground. Many of the pictures of the terrain we were using in the command briefings were of the exact area where the body was found – it was impossible to distinguish it from a rock or a shrub unless you were within 50 feet. On a completely different search in the same area planes and helicopters failed to spot smoke from a campfire for two days!

The converse is also true; on a search near Widgeon Lake our teams were within 50-60 feet of the subjects during the night, and because they were across a river and in a tent, they could not be seen. Once the sun came up, and we got a helicopter in the air, we spotted their camp fire smoke immediately.

Attraction techniques are many and varied: the glint of a mirror, flashlight (even in daylight), camera flash, or cell phone light. Coloured items dangling in trees, moving trees of any sort, rocks or logs arranged in a pattern or word. And of course, smoke from a fire. As mentioned above, none of these are guaranteed attractants, but they are at least some tools you can use to help make yourself more visible..

2 Comments on “Finding Someone from a Helicopter”