In my article on snowshoe accidents, I noted that snowshoeing seemed to be growing in popularity, but could not find an industry reference on the numbers involved. Well, I found one that tracks numbers for the American market.

The Outdoor Industry Association does participation studies on various outdoor activities from sailing to adventure racing, and they include snowshoeing. The following chart shows the growth in the popularity of snowshoeing from 2007 to 2010. 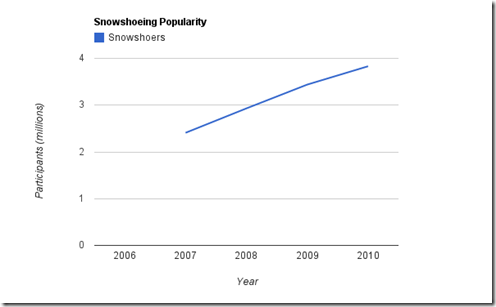 Here’s the same chart for hiking. Note that the axis does not go to zero, but it’s roughly the same scale as the above. Hiking seems to have plateaued, and declined a bit since 2008. There is a separate category for backpacking (overnight), which I have not shown. 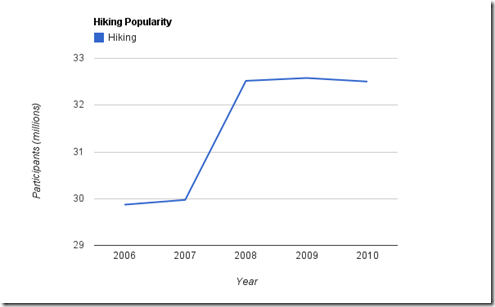 The Travel Activity Motivation Study of 2005-06 found that there was 799,843 snowshoers in Canada, or 6.9% of the adult population! Considering that the proportion of US participants was about 0.8% for 2007, it’s clear that Canadian participation in this sport is much greater than American.

This could be because there just isn’t a lot of snowshoeing in the southern US states, except the TAMS study clearly shows that Canadians participate in outdoor sports in much greater proportions than American for almost every category. For this reason, I think that the growth in popularity of snowshoeing in Canada would be equal to or greater than that tracked by the Outdoor Industry Association.