SAR Team call volumes in BC 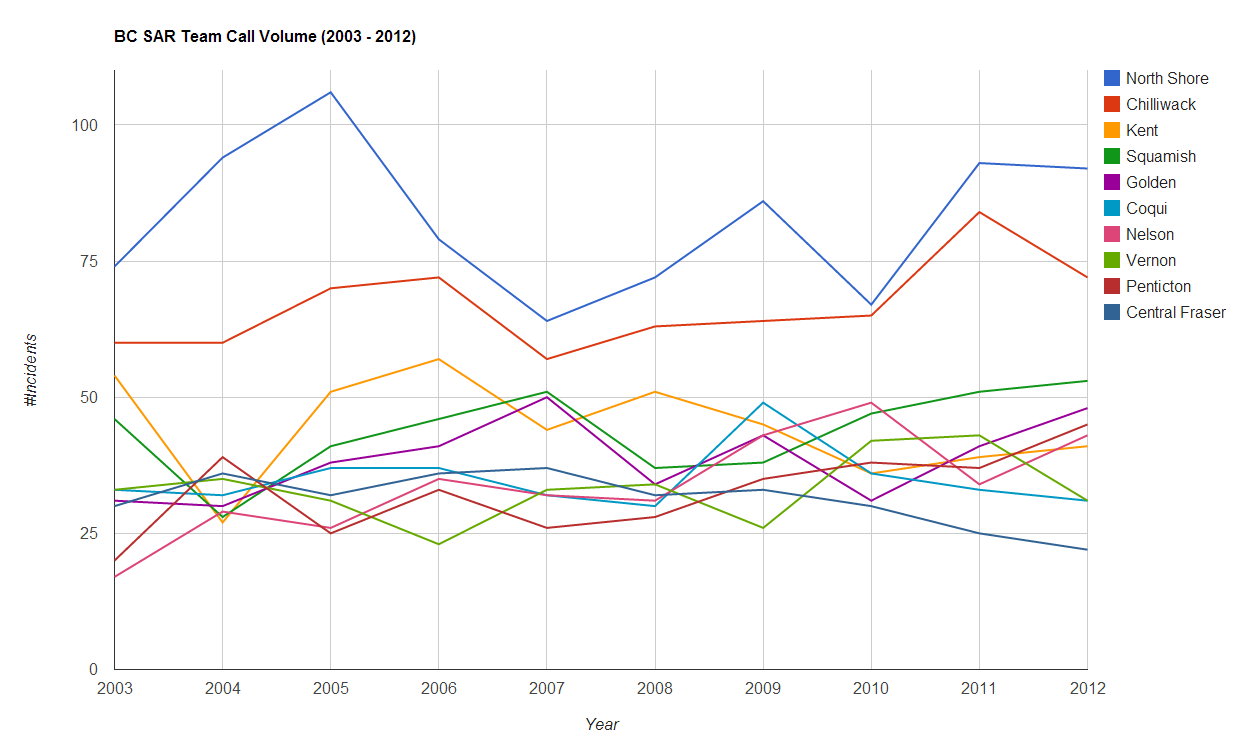 Who is the busiest Ground SAR team in BC?

I’d like to preface this post by saying that by no means should these numbers reflect the relative value your SAR groups represents to BC or your community.

The number of people who get lost and need rescue is purely a function of the popularity of your area, and the population living there, and not a reflection on your abilities, readiness or usefulness.

Even if you NEVER rescue anyone, you are there training and ready in case the worst happens. I wouldn’t drive without my seatbelt, and neither would I want to do without any of the 80 SAR groups in BC.

In fact, looking at these numbers I think that some of these teams might consider splitting their regions into two in order to better serve the people who live there – there is such a thing as too busy.

A few years back I undertook a project to download and convert all of the Emergency Management BC Incident Summaries into a format better suited for analysis. The summaries are in PDF format. I downloaded these, converted them to text and used a variety of specialized tools to convert them into a single spreadsheet. At one point I made a web site and let people query the data themselves, but I took that down since nobody was using it.

However, this did let me publish a nice set of charts showing the distribution of SAR incidents both geographically and time.

This time I went back to the source and added the years 2011 and 2012, bringing the data set to a full decade of data.

The goal of today’s analysis is to try to track which teams respond to the highest number of incidents, however I have to add a few caveats.

That being said, this is the only publicly available way to get access to confirmed EMBC tasks.

Since there are eighty SAR groups in BC, I chose to select the top ten for a chart.

North Shore Rescue, with three ski hills and adjacent to the 3rd largest city in Canada is the obvious choice for the busiest SAR team in BC. Their call volume fluctuates widely between a high of 106 in 2005, and a low of 64 in 2007. Their average is 82 incidents per year, and the standard deviation (a measure of the variability in the statistic) is 13 – also the largest in BC.

Chilliwack SAR is next on the list with an average of 67 calls a year, and a max and min of 84 and 57 respectively. The high call volume is out of proportion for the population they serve, but they are located in an area with access to several mountain ranges, many rivers, lakes and swift water, numerous logging roads and other backcountry hiking, hunting and fishing areas.

Kent Harrison Search and Rescue is the third busiest in BC with an average of 44, but represents a cluster of SAR groups rounding out the top 10 with call volumes ranging between 31 and 45 calls per year. Each of the groups in this cluster seems to trade places with the others regularly, and Kent Harrison has the lead in the 10 year average by only one incident over Squamish SAR. The standard deviations of these teams are also similar between 4 and 9.

The top ten, in order based on average number of calls in the 10 years of data, are

For interest, here is a chart visualizing the spread of call volumes among all of the SAR groups. 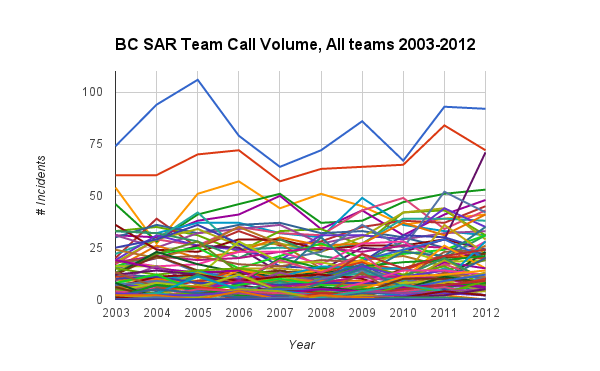 This chart shows the distribution between the SAR groups, showing that the top two are clear outliers, a cluster of teams around the 25-35 mark, and many teams that have under 10 incidents per year.

Of the top ten, six are in the Southwest region of the province, divided between the BCSARA Fraser Valley region and the Sea-to-Sky region. Based on my previous post on distribution of SAR incidents, this is not surprising since 36% of all incidents in BC are in this area.

Nelson, Vernon, Penticton and Golden are clear hotbeds of backcountry activity, all of them having rivers, lakes, mountains, glaciers and a recreation profile that includes mountain biking, hiking, climbing, mountaineering, backcountry skiing, and sledding among the other sports.

It is worth noting that Campbell River, Comox and Hope are numbers 11, 12 and 13 in call volume, followed closely by Kamloops, Whistler and Ridge Meadows. These teams can be included in the cluster of teams already mentioned between 25 and 35 calls per year, and are similar in that they also compete for the top spot in that cluster. Notable that two of these are on Vancouver Island.

The variability in the number of calls for the top two teams might have something to do with both Chilliwack and North Shore being long line rescue providers for other teams in the area. Any call where they are called to assist a nearby team counts as a call against their team. Being a long line provider in the busiest area of the province means there are probably a lot of calls from nearby teams.

Now that I have the data for the past ten years, what kind of questions do you want answered? In the next few weeks I’ll try to answer them along with re-doing the frequency and geographical distribution analysis from two years ago.

For example, the high standard deviations for some teams means that a high call volume in one year does not necessarily mean that the next year will be as high. This makes it hard to predict what resources will be necessary for the next year. SAR groups can use these numbers with other facts about their search area to better predict what the causes of these variations are.

4 Comments on “SAR Team call volumes in BC”