Cypress Mountain and charging for rescue 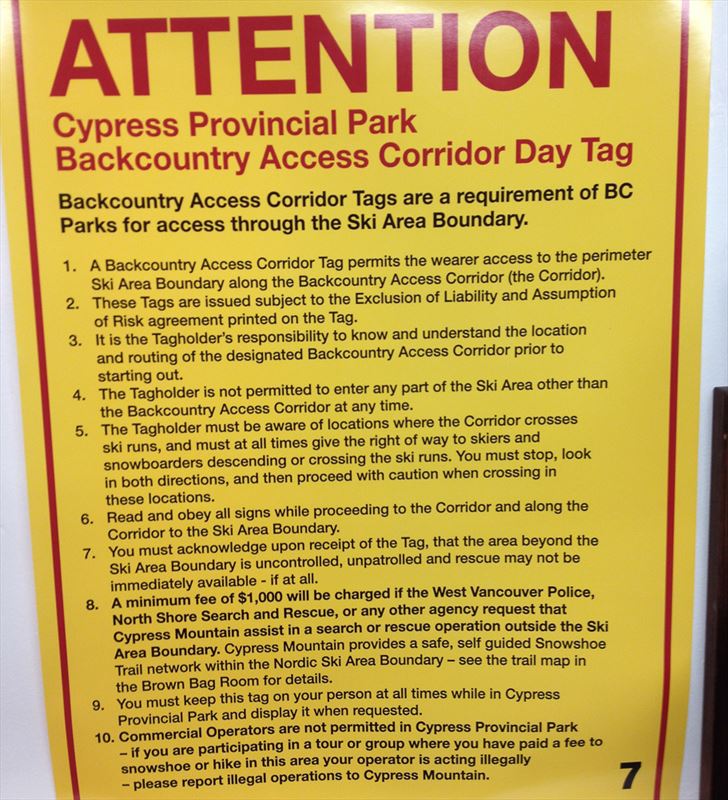 Cypress Mountain has recently posted signage at the entrance to several backcountry trails that pass through the ski area regarding changes in the policy.

The most troubling of these signs is the following which states that anyone calling for rescue from any agency will be charged a fee of $1000 if any of their staff are involved.

The specific wording is as follows:

A minimum fee of $1000 will be charged if the West Vancouver Police, North Shore Search and Rescue, or any other agency request that Cypress Mountain assist in a search or rescue operation outside the ski area boundary.

On the well known backcountry forum, ClubTread, several people have pointed out that this policy blurs the lines on whether the rescue is free, or comes with a cost. It implies that there might be a fee if Cypress Staff are involved, but does not state whether this is normal, or exceptional. The charge is described as a “minimum fee” which brings the connotation of a charge for a service.

There is some indication from Cypress staff that the fee is a “deterrent” which it would most undoubtedly be – a deterrent to calling for help when help is needed.

People reading this policy may get the wrong impression that they will be charged for rescue, and may delay calling for help because of it. A delay in calling for help can mean the difference between a simple, daylight rescue, and a difficult, and riskier response at night. This means rescuers exposed to more risk, subjects at greater risk for hypothermia and other injuries, and a greater expense to the public, who is ultimately footing the bill.

As a side effect, delaying a call for rescue would also put Cypress staff at greater risk if the delay extended the rescue into night operations, and could also cost the mountain more in the long run.

Cypress Mountain would do well to notice that no SAR agency charges for rescue, and are against the policy for the reasons stated above and many others.

In fact, high profile SAR organizations such as the US Mountain Rescue Association, US National Association for Search and Rescue, and even North Shore Rescue, are against the practise – all claim it increases risk to the subject, to the rescuers, and results in worse outcomes for the subjects.

Cypress Mountain is a company whose goal is to make money, and rescues represent a cost, so they may have a right to create a policy where they “charge a fee” for any staff involved in a rescue. However, they seem to misunderstand the social license.

The harm that this policy creates is much greater than any benefit that the “cost recovery” it might represent. The “fee” does not function as a deterrent, and the attitude of Cypress Mountain is not that of a good corporate citizen.

Devoting time and energy to rescue hikers outside the boundary of their tenure can only be perceived as an act of mercy, and being a good member of the outdoor community. The fee not only endangers rescuers and subjects, it promulgates the culture of shaming the victims. Cypress should reconsider this position, and the general attitude of obstructionism present in the signage and barriers to accessing the park through their tenure.

When someone needs rescue through bad planning or bad luck, they must know that they can call for help – and if the mountain is perceived as being charitable in this respect it can only help improve their image with the inevitable media attention such a rescue can bring.

6 Comments on “Cypress Mountain and charging for rescue”