My friend Doug is a volunteer fire fighter on Hornby Island, and related the following tale via Google+ (reproduced here, in full, with permission).

By the way, the Hornby Island Volunteer Fire Department needs a new fire hall, and you can read about that project, including Doug’s video on what’s wrong with the old fire hall. 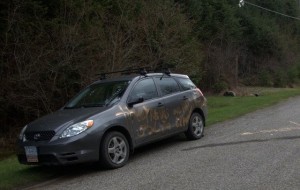 This is the new paint job on our car. It happened after I abandoned it when responding to a backyard fire call. I abandoned it because the dude who lit the fire chased me out of his yard with an axe and threw it at me as I booked it up the road amid accusations that I killed his daughter and threats to shoot me.

When the RCMP arrived on island 2 hours later at 1am they called to say that he had wired a bunch of IEDs to the car and had them all hooked up to a battery.

…I’m taking the car into town this morning to get the insurance claim started and to get a critical incident stress debriefing with a councillor. I think I’ve rounded the corner and am 95% back to normal.

As Doug pointed out to me, this incident says a lot about how an emergency responders are called to interact with people. SAR members have related similar accounts to me about responding to suicides and drug overdoses. Sometimes the worst thing about responding to an event is the risks associated with people and mental health. The effects on the responder can be quite stressful, as this threat to Doug’s life shows.