Distribution of SAR Incidents in BC 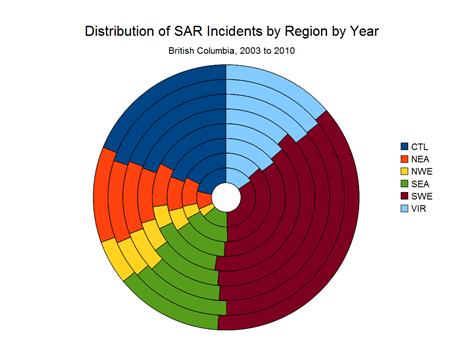 I was at a meeting last night and heard a SAR member state a bald claim that the Southwest region of BC has more incidents than the rest of BC combined. I was pretty sure this was not the case – so I set out to generate some simple statistics from the InfoSAR project.

The Incident Summaries are not explicitly spatially indexed, which is to say they do not have explicit coordinates associated with each incident . However, each one is assigned a region, and we can do some quick comparisons with them.. 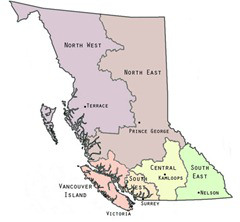 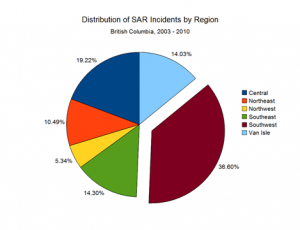 As you can see, the southwest region of BC only accounts for a little over a third of the SAR tasks in all of BC. Vancouver and area contain approximately 2.254 million people, which is approximately 54% of the population of BC (as of 2007), so the rate of incidents per person is lower than the rest of the province.

So the rest of BC has roughly twice as many tasks per person since 2003 than the southwest region.

In the next chart, I separated each year into a ring in the pie chart, creating a doughnut chart, the innermost ring being 2003, and the outermost being 2010. This shows that the regional distribution of incidents for southwest BC has never been more than approximately 36-37% of the total incidents for any year. The distribution seems to be fairly stable, with the exception of the Northwest region, since 2003. 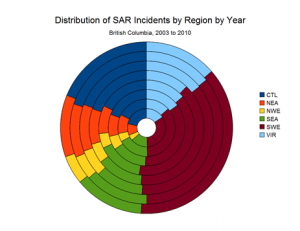 This is the simplest form of analysis possible given the data; a more complex analysis would take the data and assign geographic coordinates to the location of each incident (possibly an area for larger incidents), and generate a heat map showing the density and distribution in a more intuitive and granular way.

Of course, even the simple statistics above can be prone to problems; a backcountry accident depends on people, and where they travel – things that do not obey the simple rules of drawing a jurisdictional, or organizational boundary on a map. Simplistic analysis can lead to problems such as the locational fallacy, or the modifiable areal unit problem (MAUP); the ignorance of these problems has cost millions of dollars and many lives in the past.

3 Comments on “Distribution of SAR Incidents in BC”