I’d volunteered for the team in the fall of the previous year, and had been formally accepted as a member-in-training in January, 1999. The cohort of 10 new members had begun our GSAR (Ground Search and Rescue) course, and by July the trainers had decided that we were ready to participate in searches while being accompanied by two other experienced members.

We had a little ceremony where we were given our pagers, and I remember the senior members of the team chuckling a bit as they told us to get used to carrying them. They sure knew what they were talking about; that small black device has been my constant companion, and sometimes the bane of my existence now for 10 years. 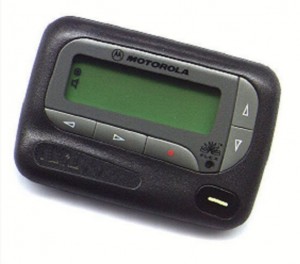 This search wasn’t the first search that the MIT’s had been called to – a few weeks prior, some members had participated in a “Mutual Aid” incident that was an urban-wilderness interface search in the Fraser Valley. The members reported that they had spent most of the day going door-to-door. I was not able to attend that search.

As it happened, on July 17th the pager went off, as I remember, around midnight. I recall the way it felt, like a bolt of lightning, a shot of adrenaline, and a huge burst of excitement.

This was it, the real thing, not a test, not just a hike. I had to be ready for anything. I was almost panicky as I put my SAR pack together.

The older members has told us of an award that they gave at the annual Christmas party, known as “The Helmet Award.” This was given out every year to the member(s) who had “messed up” (to put it politely) in the most spectacular manner. The stories of the previous recipients of the award were well known to the entire team and a source for much amusement. The recipient would be given a special helmet which they were responsible for until the next year. They also had to “decorate” the helmet in a way that memorialized their achievement in some way. Over the years the helmet had amassed quite an array of adornments: loud speakers, flashing lights, sirens, a fuel truck, a small boat, etc. etc.

As I prepped my gear all I could think of was “don’t fuck up”, don’t get the helmet award.” I felt that on this, my first search, I would be under more than average scrutiny. I needn’t have worried. 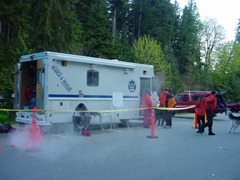 My excitement built as I threw my gear into the truck, and drove (we’re not allowed to speed, so let’s just say I did the speed limit) to Buntzen Lake. Since I lived a little further than most members, the Command Vehicle was already set up. I signed in, and did some more gear prep. We were then briefed; a solo hiker had been reported missing, and his card found in the parking lot. There was no indication as to where he had gone hiking. Our task, at this early stage, was to run all of the trails in the networks on both sides of the lake.

The SAR manager began handing out tasks. Teams of three with one MIT in each team. Teams entering the trail networks from the north and the south, on both the east and west sides of the lake, to meet in the middle. I was assigned a trail on the north east side of the lake: the Swan Falls trail.

I’d never hiked this trail, and I knew it was quite long with a lot of elevation gain. I figured I was up for it though. However, as I did a final prep of my gear I discovered to my dismay that I had not put the top on my new MSR Dromedary Bag properly, and 2 liters of water had quietly filtered through all of the gear in my pack and was now pooling on the floor of my truck.

Panic! I was going to get the helmet award for this for sure! I decided, and I’ve learned that most SAR members will do, to cover this up, and never mention it to a soul (until now). I wrung out anything that seemed wet, and thankfully my “bag in a bag” packing method had kept almost everything dry. I got some more water and I was ready to go.

At this point the task went from exciting to ordinary; except for the fact that we were hiking at night, and we were stopping every few minutes to do whistle blasts, call out the subject’s name, and report in on the radio, the evening progressed as a normal hike. We hiked, we rested, we ate a little, and went on. We reached the snowline and examined old tracks for evidence of our subject. As morning came, and it got a little lighter the birds started singing. My the time we reached the top of Eagle Ridge, we were just in time to see the dawn.

At some point, another team found the subject. My feelings at the discovery of the subject, and the “return to base” message on the radio are the same to this day: relief. It means that although we weren’t the ones to find them, the search is almost over. In this search however, the most exciting part was just about to happen. 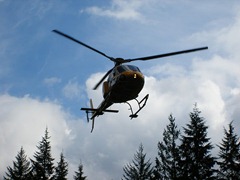 Being a complete newbie, I was expecting to have to hike all the way back down the trail, a trip of another 3 hours. However, there is a PEP policy that states if it takes more than an hour to get a SAR team or gear to or from the field, the use of a helicopter is allowed. When I joined SAR I had no idea how much we would be using helicopters, and this first search happened to be the second time I had ever been in one. Unlike my first trip, I would be climbing into this machine with the blades moving.

We were instructed to find a site to be picked up. We hiked another 20 minutes over the top of “Mount Beautiful” to a small clearing at treeline. My team leader briefed me on the procedure of getting into the helicopter; he would get into the front seat first, and motion me over. I would get into the back seat, and the last member would hand me the packs. This was clear, and ordered since we would not be able to hear much once the helicopter arrived.

A few minutes later we heard the distinctive chopper noise, and I saw my first glimpse of the yellow Talon Helicopters AS 350 rise over the ridge. This machine, and the others that the company owns, would become very familiar to me over the years. The team leader called him in by the clock, and he landed on the patch of snow we had chosen. We got in, as instructed.

Another thing I’ve learned is not to be surprised at how helicopter pilots fly. My previous experience as a passenger in a helicopter did not prepare me for how the pilot, Talon owner Peter Murray, flies in the wilderness. We hovered, rising slowly for a few feet, drifted slightly left, and tipped the chopper over the edge of the ridge, dropping down the mountain side and gaining speed as we dove toward Coquitlam Lake. Turing, and rising, we crossed back over the top of Eagle Ridge through the pass where the trail meets the ridge crest, and a few short minutes later we were back at base.

With the search portion of the task over, we participated in the clean-up phase; putting gear away, picking up field team members in the truck, etc., followed by breakfast at a local restaurant. At some point we got the story of how the subject got lost, and who found them, and how it felt. It would be another 5 years before I was on a team that found the subject, but that’s another story.

The following is the 2009 Incident Summary of the task:

SWE Region – 17 Jul. – 24 Coquitlam, 3 North Shore, 3 Maple Ridge and 2 Surrey SAR members responded to search for an overdue hiker in the Buntzen Lake area, Anmore. The male had gone hiking up a difficult trail and failed to return. SAR members located the male in good condition and escorted him down to bottom of trail.

The task went on long enough that the SAR managers activated mutual aid, and got members of some other local teams to attend. If the subject had not been found in the first eight hours, they would have sent a second wave of teams in to resupply, assist or replace field teams.

It turns out the subject, equipped with the minimum amount of gear, had found himself overtaken by darkness while descending the trail. He had been unprepared the snow present on the trail, and how much this would slow him down. Using his common sense, he had decided to stay put rather than travel in the dark. The team that found him had actually woken him up with their yelling, and had walked down the trail.

In retrospect, this was a classic search for this area. The main thing that has changed in the years since is that many people carry mobile phones now, and even thought coverage is spotty some manage to get a call out. Many people when faced with darkness, and not carrying a light will decide to keep moving. These are the ones we usually have to carry out.