In the TV show House, there’s an ongoing joke about Lupus. I apologize in advance if anyone has experience with this serious disease, but it’s useful for an illustration. 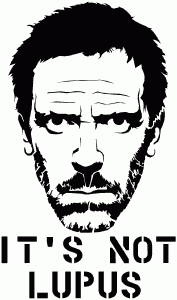 Lupus is a disease characterized by having an large variety of symptoms that mimic many other diseases. To risk killing all of the humour, the joke “It’s not Lupus” is said in reference to the fact that everything looks like Lupus, so it’s not a useful suggestion.

SAR is sometimes like a episode of House in that those episodes use the scientific method. A theory is proposed, the theory is tested, repeat once or twice, and eventually the solution is found. SAR uses search theory, and we assign people to search areas using different techniques based on how likely it is the subject is in that area.

Whenever we have a particularly difficult search, someone always floats the theory that the subject wanted to disappear and has faked their death in order to escape a bad debt/unhappy marriage/ugly pets. This is when I pipe up and say “It’s not Lupus”, and then they throw me out of the command truck.

Proposing that the subject is not in the area is a theory we can’t test, and is useful only in the event that we can expand the area to include a new search area, or if we can prove conclusively that they’re somewhere else.

For example, I’ve searched all night for someone who went home to someone else’s house. Although it was never a theory in the search, there’s always some possibility that a subject is in the “rest of the world (ROW). We continued to search until the subjects called to tell us  where they were. We don’t stop until we find the person, they show up elsewhere, or we run out of resources and reasonable places to search.

We can’t prove a negative in this case. We can either find the person, or give up.

Suggesting that the person is faking their death, while an interesting theory that makes for some good movie plots, is like saying that the patient has lupus, and it’s never lupus (except when it is).