Donations are not repayment 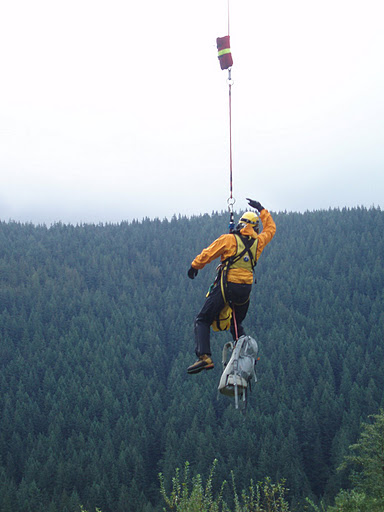 Training in Squamish in 2008

There has been a recent spate of rescues in BC where the subjects were under the impression that they would have to pay a fine for being rescued. This is, of course, incorrect.

The problem is, when people think they will be billed, they don’t call for help and get into worse trouble. The risk to rescuers goes up, the person is harder to find, chance of injury or death is greater and the costs of the rescue to the province are higher. Every minute a person delays calling for rescue makes the situation worse.

However, the public can be excused for being under this impression because of the absolutely terrible job the media has done in reporting on a single incident last year.

Cut to a few months later, and the rescued snowboarder holds a fundraiser and donates $10,000 to North Shore Rescue, an admirable act.

However, the media step in and begin reporting this donation as “repayment” and then the fun starts.

These are just a few of the hundreds of web sites and news papers that endlessly repeated this story of a snowboarder paying for his rescue.

What this illustrates is that how you report on a story matters.

The choice of the word “repay” is at fault. Although the precise definition of this word does not entail a financial debt, to most this means that the person is paying for something, in this case the service of being rescued. In many headlines, notably the Huffington Post, the facts are wrong! Readers just scanning the story or headlines, or just reading a twitter feed (most people don’t click on the links) would get the impression that there was a bill to be paid.

The results could be disastrous, with at least three recent rescues involving people who did not call for help until they were desperate, and at least one local city councillor under the impression that people should pay for rescue like out-of-bounds skiers do.

Media have a duty to not only get the facts straight but to get the nuances of the story right. When they hint at repayment, or some sort of debt to to the SAR group this leaves the impression with the public that they will be charged for rescue.

It would be a tragedy for someone to be killed or hurt because of the sloppy wording in a headline.