↓ Skip to Main Content
Home › Blog Entry › Who is paying for SAR in BC?

Who is paying for SAR in BC? 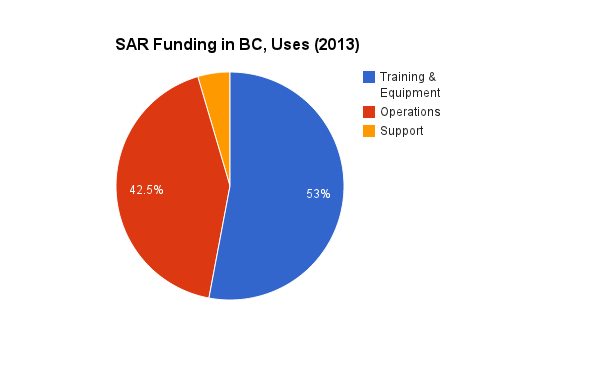 Who is paying for SAR in BC? A better question is, where does the money come from and how is it used?

The BC Search and Rescue Association (BCSARA) released a discussion paper last year that effectively answers most of these questions. Based on over 10 years of research and analysis, it outlines how much it costs to run BC’s SAR program, and where the funding comes from. It also makes some very serious recommendations on how much money is actually needed to run the program.

In this post I’m going to take those numbers and break them down a little bit.

First, the table showing where the funds come from.

An “Operational” cost is one that is required for a rescue. A non-operational cost is a required cost (training, equipment, maintenance) in order to maintain a SAR team at an operational level. The division is important to illustrate that, while SAR costs are covered by taxes, the money required to keep teams ready to respond is not from taxes, and is not stable, more on this later on.

As you can see, gaming accounts for approximately 1/3 of the total, and EMBC response reimbursement another third, with the rest coming from other sources. One thing to note is how small the actual “Other Fundraising” category is – donations fund less than 10% of the total cost of SAR.

Where does the money come from?

This chart is intended to give a broad strokes picture of where the money comes from. Almost 60% directly from taxes, 28% from the gaming grants, 9% from donations and 3% from federal grants.

An important point to notice in this chart; the money for SAR that comes from taxes is relatively stable — it’s sort of “guaranteed” in that most of it is spent on operational costs – actual rescues and helicopter time.

40% of SAR funding is not stable funding — this is the amount necessary to buy equipment and train volunteers.

It seems like a crazy system to pay for the rescue side of things from taxation, yet leave the preparedness of the volunteers to themselves. SAR groups have to individually raise funds through gaming grants and donations to make up this portion of the pie.

Where does the money go?

This last chart illustrates what the money is used for. I’ve collapsed donations into non operational costs, along with Gaming grants, NIF and RCMP funding.

53% is used for SAR training and equipment (non operational costs)

If you were to break this chart down for individual SAR teams, the picture might be different depending on the group. This is a provincial perspective. It’s also important to note that this doesn’t include SAR assets currently owned by SAR teams, which are estimated at 7.8 million – most of which are operational requirements (vehicles, equipment and buildings).

I said it earlier in this piece, and I will repeat it here; while the operational costs to execute a search and rescue task are covered by taxes, the non-operational costs are largely up the individual teams to come up with. This is the part of SAR funding that is not stable, or guaranteed. As I’ve said before,

Approximately 40% of the entire cost of SAR in BC is not sustainable because each team in BC scrabbles for donations and grants to fill it in.

As can also be seen from the grants, donations only account for 10% of the SAR funding model, and are another part where a SAR team must spend time attempting to attract the attention of the media and the local population in a sort of popularity contest rather than spending time training or managing the team. A distraction to say the least. While this money is appreciated and essential, it does not fund SAR.

“Sustainable long term funding” from the public would mean quadrupling the amount of donations, and sustaining the effort at maintaining that level of engagement. This is frankly impossible. This effort from volunteers who would be better off spending their time training so they can actually rescue someone safely and effectively, something that takes a lot of time already.

SAR is an essential public service.

Unlike other service clubs, if we are under funded it will result in ill equipped SAR members, and a lack of safety. If we are serious about sustainable, stable long term funding for SAR then the only way is to ask your MLA, Council member and MP to prioritize funding for SAR through guaranteed annual grants.

British Columbia is a world class tourism destination, with amazing wilderness. Our Search and Rescue system is the envy of many other jurisdictions in Canada and elsewhere in the world. There are some simple steps we can take to improve it, and one of them would be to recognize the essential nature of the service.

If the gaming grants were a guaranteed chunk of money from the same source, distributed on a needs basis it would improve SAR in BC immensely.

7 Comments on “Who is paying for SAR in BC?”