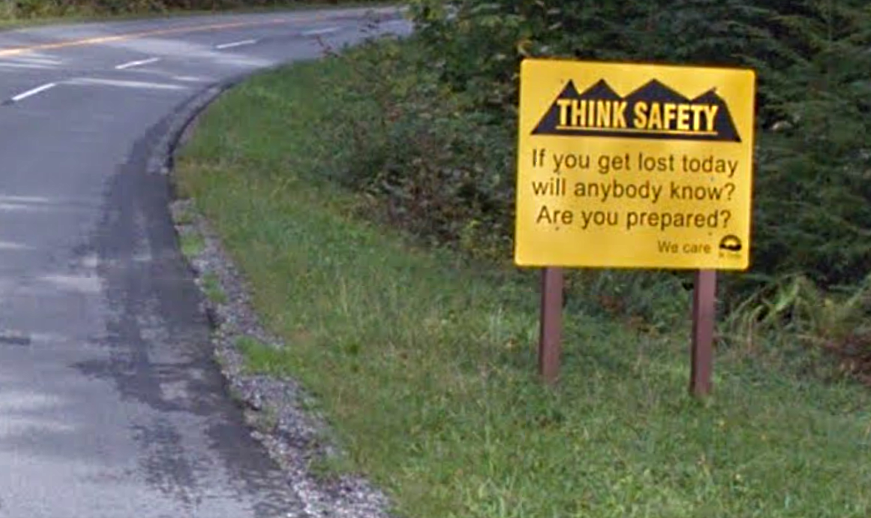 On the road up to Mount Seymour, near the start, there’s a yellow sign: 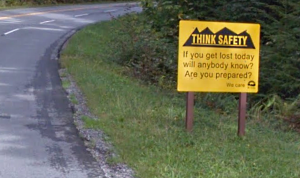 If you get lost today will anybody know?

In the 80’s I’d seen this sign multiple times a week every winter as I headed up there to do some backcountry skiing – dawn patrol to the summit before the ski area opened for the day.

I’d think to myself “who is that message for – by the time someone is at this point on the road, it’s too late to let anyone know”.

Of course now we have cell phones.

That sign, by itself, is not a safety program. It doesn’t tell you much, but it does get the message across. If you don’t tell someone where you’re going, nobody will know if you get into trouble, so you’d better think about it.

I have a friend named Owen I did a lot of mountaineering with; he was meticulous about safety, something I always ascribed to his love of sailing. If there was ever an environment where organization counts, it’s sailing.

After every trip, as soon as his phone beeped that we had a signal, he’s make a call to his parents. He called it the “I’m not dead” call – and would often start the call with that phrase, followed by a quick summary of the adventure.

Of course now a lot of cell phones never loose signal. A lot of people never turn them off, and almost nobody leaves them in the car like we used to – for a lot of people the phone is their camera and their GPS (which is a whole other kettle of fish).

The sign on Mount Seymour and the cell phone are part of the backcountry safety net. The sign reminds you of what you should have done before you saw the sign. The cell phone is a tool that can help you follow through on that plan.

A public safety agency tries to get out the message about backcountry hazards; in a park you’ll find more public information – for example, take a look at the following series of signs from Lynn Headwaters.

There is an incredible amount of information on those signs. In the first picture you can see a trail head registration system where hikers can fill in their information and put it into a slot. You can see that Metro Vancouver has put a lot of time, effort and money into placing these signs in such a way as to give hikers access to the information they need to make good decisions.

The BC Search and Rescue Association created AdventureSmart for this purpose.

On the AdventureSmart web site you’ll find a LOT of information about the various kids of activities and what you need to take with you to be prepared – these include the 10 essentials and other equipment lists you need for boating, snowmoibiling, hiking and other activities. You’ll also find the trip plan and the advice to let people know where you’re going and when you’re going to be back.

However, all of this information presupposes that you’ve told someone where you’re going, and that they will report you missing. If you get to the Lynn Headwaters or Mount Seymour without the right information and you see those signs, will you turn around? Is that message getting out too late?

We have many examples of what happens when you don’t tell someone where you’re going – one very high profile from recent memory.

Tom Billings, a British tourist was in Vancouver and went hiking in at 9 am on November 25, 2013. The first appeal to the public for information about his disappearance was December 2, 2013 – or 10 days. It took about two more days before someone reported having seen him on a trail on the North Shore – a credible sighting. 12 days.

Billings’ father was quoted by the CBC as follows

The thing I don’t understand…is simply how in the First World, someone can disappear…when we’re all connected 24 hours a day,

Mr Billings was described as meticulous. Pictures show him with a backpack, boots gaiters, and a hiking pole – appearing the be prepared for a hike.

Now I have no idea what he took with him and how he was dressed on the day of his disappearance. I don’t even know if he had a smart phone with him. Clearly Mr Billings, a tourist, did not leave a trip plan or have anyone to call to tell where he was going.

This resulted in the 10 day delay. The number of instances where someone was found at all after such a delay is negligible.

We can only speculate, but if Mr Billings had left a trip plan, and someone had reported him missing, he could have been among the other 98% of people that BC Search and Rescue teams manage to rescue.

There’s been some reaction to my suggestion that taking a selfie at the trailhead could be a valuable public safety tool.

Oddly enough, I agree with most of the criticism of my idea — possibly because I wrote (and spoke) about the failings of the idea myself!

As is usual for modern communications, most of the reaction is to things I did not say rather than things I did – something that comes from reading headlines rather than considering the content of an article.

I consider the #TrailHeadSelfie idea as a useful public safety message, one that reaches a group of people who would not normally think about backcountry safety. It has also sparked a discussion about backcountry safety throughout our region that gives SAR groups a huge opportunity to get the message out – that many of the searches we do could be prevented if people consider safety before they go out.

Similar to the aforementioned big yellow sign, the audience is important when considering a public safety message. Like the sign, the #TrailHeadSelfie is there as a reminder of all of the other things you’re supposed to do before even a short trip – by boiling it down to a short, simple, easy to remember concept.

If you’re passing that sign and haven’t done the trip planning, it’s too late. Similarly, if you’re only taking a selfie then you haven’t got the message.

Backcountry safety is the process that consists of many parts; all of them are important, and leaving one out can mean the difference between life and death.