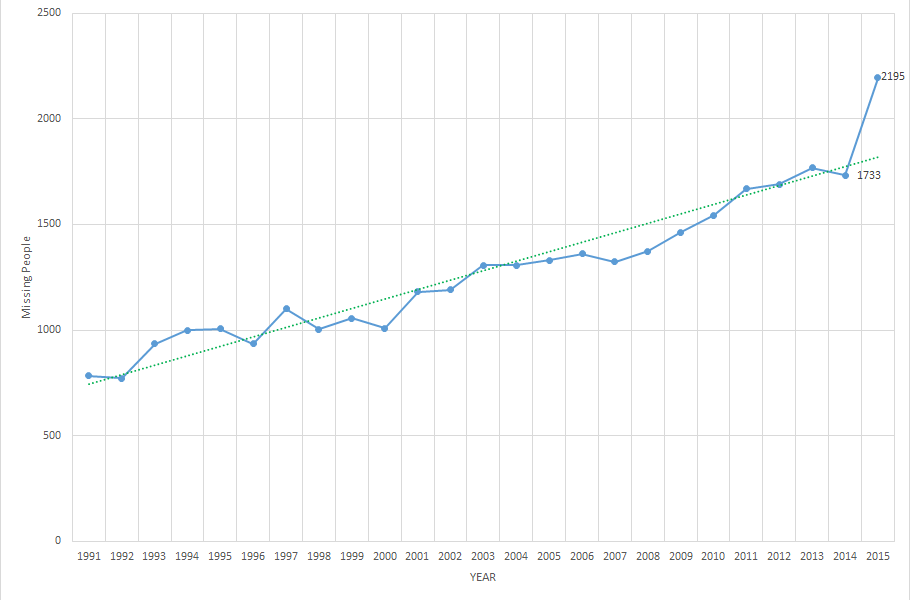 By every measure 2016 was a busy year for SAR teams in BC. Groups throughout the province have been reporting that their call volumes are up, with many teams posting their busiest years ever.

Note: please see the update at the end of this article.

With statistics from Emergency Management BC, we can see clearly just how busy the 2015 – 2016 year was.

The chart shows the total number of missing people that Ground Search and Rescue teams in BC were tasked to look for from 1991 to 2015/16 (see methodology below). I’ve presented it as a line chart instead of a bar chart to highlight the growth in SAR responses over these years. I’ve included a trend line on the chart that attempts to fit the data to a linear regression. The R² for the regression is 0.9072 which indicates a good fit to the data.

The numbers include all people SAR was asked to respond to including those that were found deceased, and those we never found. It includes all regions of the province and is part of EMBC yearly statistical tracking. This is not the number of SAR Tasks as there can be multiple people per task. I’ll address the number of SAR Tasks in another post.

Trends in missing people are notoriously difficult to understand and have their sources in sociological and demographic phenomenon. SAR members throughout BC often muse as to what drives the fluctuations individual groups see in their numbers. These aggregate statistics can show a province wide trend but without breaking them down by region or type of call it is impossible to develop a theory as to their cause. This is frustrating to SAR members.

The data in the chart above was derived from a chart published by Emergency Management BC (EMBC). I then ran that through a service that can extract data from PDFs and images to come up with the number of missing people per year from 1992 to 2016. This was necessary because EMBC does not make the raw data available for analysis. Note that EMBC reports on statistics using a financial year boundary of April 1st, so 1991 on the chart is in fact the financial year 91 / 92 and 2015 on the chart includes April 1 2015 to March 31 2016.

Like a dog with a bone I’ve been musing on this chart for several days driving my partner crazy. So I went back to the incident reports and found some of the reasons for the spike in # people rescued.
September 15th 2015:.
” 3 Pemberton SAR members responded with a helicopter to rescue 28 hikers from Lillooet River South, 20 stranded hikers at the CRT camp on the north side of Lillooet River and Meager Creek, and 3 mushroom pickers after heavy rains and flooding washed out several areas along the Lillooet Main FSR South, near Pemberton. All 51 people were rescued or located.”
October 4th 2015: Alberni Valley Rescue assist 20 hikers on Mt Arrowsmith
“22 Alberni Valley Rescue members responded to a large group of hikers that were stranded on Mt. Arrowsmith. The hikers were assisted off the mountain and sent home”
This summary doesn’t do the rescue justice as it took over 10 hours to rescue the group.
October 25th 2015: West Coast Inland SAR assisted in the rescue of 27 in the tragic sinking of a whale watching vessel.
“14 members of West Coast Inland SAR responded to assist JRCC following an accident involving a whale watching vessel that capsized and sank at Plover Ridge off Vargas Island, near Tofino . The vessel had 27 people on board. SAR members assisted with patients arriving at the town dock. At the time that the team was stood down, a total of 21 subjects were rescued alive, 5 were located deceased and 1 person was missing.”
The 2015/16 year was busier than usual (I’ll publish the chart Monday) and shows a significant increase above the average for number of tasks, but the 98 people rescued in the above reports seems make this year an extreme outlier.
For perspective, the chart below shows subjects rescued per task 2002 to 2012 and as you can see the number of times that the party size exceeds 20 is quite rare. To have three in one year is exceptional. 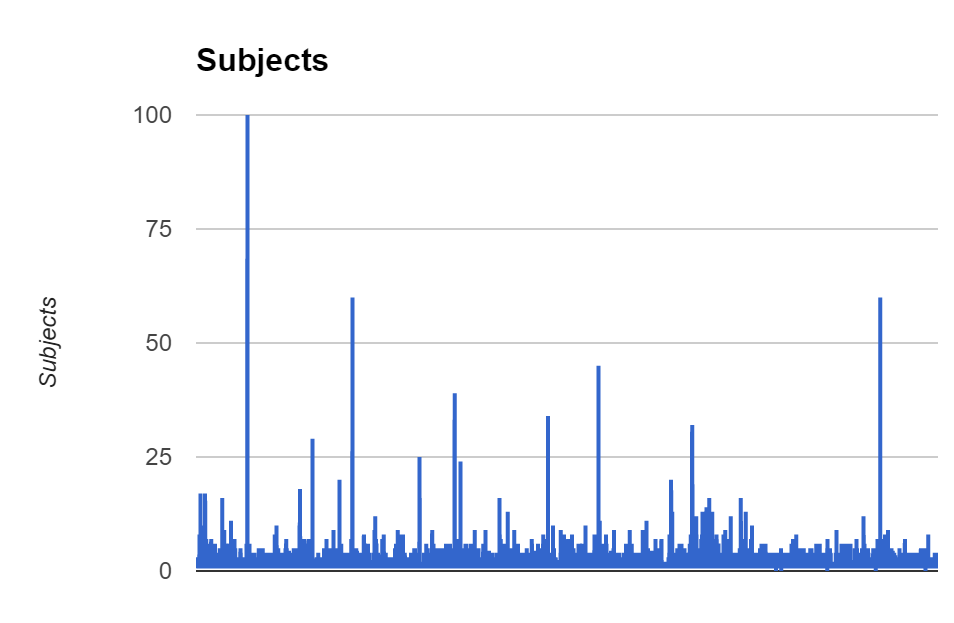