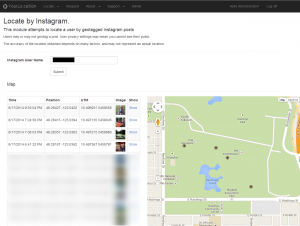 I wrote YourLo.ca/tion just over a year and a half ago.

As I described the project, I had heard of systems out there that used cell phones to locate people; when my friend and SAR colleague Tom mentioned one to me, I googled some code, and implemented a system over a weekend. Clearly, this was not rocket science. However, it proved very handy almost immediately to my own SAR team — during testing we ended up using it on a live search which made the news and resulted in a few TV interviews.

Since then I have heard of other systems that pretty much use the same techniques, the HTML 5 Geolocation API, to load a web page, and determine a lost person’s location, and send it to the requesting SAR team. I’ve also expanded the features in the original project to use push technology, Google maps, and a few other tricks to assist SAR people with the location task.

Believe it or not, I have heard almost no feedback on the project, until about two weeks back!

At least one local SAR team has been enthusiastically using the service to great effect almost since the launch!

I got the following message by email

Hi Mike,
We used your app last night to get a location from a subject whose anecdotal description of location was super vague.  He only had 4% battery left and we got the location from him just fine. This definitely contributed to the speed of one of our fastest ever ground/night rescues.
Thanks for your work!!
Cheers

Now I can check the server logs if I want to, but I can’t tell the specifics of any particular use of the service. I don’t get the back story, the weather conditions, the difference between a test and an actual success. I quizzed my contact about his use of the service and he came back with three other instances this year alone.

I also learned that the service was not validating an email field, which was causing the email notification to fail. This is a bug I can fix.

The first scenario for using the service is a lost person who does not know how to use the GPS on their phone. In this case, texing them from YourLo.ca/tion allows the web site to automate the process of determining their location. This is faster than trying to describe it to them over the phone, and uses less power.

The second scenario is when the subject thinks they know where they are. They may even send you coordinates. YourLo.ca/tion can be used to verify the location, and provide you with an estimate of the error in the cell phone’s signal. This can either give you confidence that the coordinates the person thinks they are at are real, or they can reveal that the phone really doesn;t know where the person is.

The main caveat for the system is that it needs a text and data connections. In a modern phone, voice and data are pretty much the same thing, so if you have a signal, you usually have both voice, data and text at the same time.

Users of YourLo.ca/tion, I need your feedback!

I need to know who is using the service and how often for real rescues. There are two important things I can do with this information

First I can improve the service based on notable failures. I can scan the logs for situations where the service failed in some way, and fix bugs or add features as requested.

Second, I can use the level of use that the service is getting to apply for grants to continue operation. Maintaining YourLo.ca/tion is not without costs: servers, domain names and other items have hard costs. While I do not feel I can charge for a service like this, it would be nice to have an operating grant.

If you, the users, document it’s use and send me feedback, I might be able to make the case for some funding at some point.

In any case, contact me here, and let me know what you think.